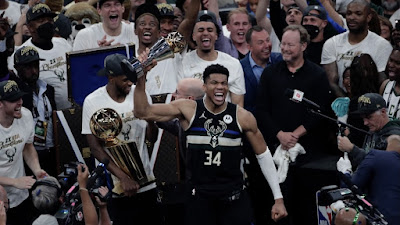 The Milwaukee Bucks are 2021 NBA champions after beating the Phoenix Suns 105-98 in Game 6 to capture their first title since 1971.
Giannis Antetokounmpo was named NBA Finals' Most Valuable Player after an historic 50-point performance to wrap up the series 4-2. The "Greek Freak" shot 16-of-25 from the field and 17-of-19 from the free throw line, to go along with 14 rebounds and five blocks Tuesday night.
After being down 2-0, the Bucks went on to win the next four games to become the first team since the 2016 Cleveland Cavaliers to win the championship after losing the first two games of the Finals.
Now an NBA champion, Finals MVP, two-time league MVP and Defensive Player of the Year, Antetokounmpo was asked about all that has occurred since signing his five-year, $228 million super-max extension (the largest contract in NBA history) prior to the start of the season.

"I couldn't leave. There was a job that had to be finished," he said during his postgame presser. "Coming back, I was like, 'this is my city.' They trust me. They believe in me. Obviously, I wanted to get the job done. It's easy to go somewhere and go win a championship with somebody else. It's easy. I can go to a superteam and just do my part and win a championship. But this is the hard way to do it, and this is the way I chose to do it."

The Bucks have won their second title in franchise history and the first in 50 years. Meanwhile, the magical season that was the 2020-21 Phoenix Suns comes to an end without a championship (still zero titles won). Despite missing the postseason for the past 11 years, the Suns made just their third trip to the Finals ever and the first in nearly three decades.
Milwaukee, who finished with the Eastern Conference's third best record at 46-26, swept the Miami Heat in the first round (after getting eliminated by them in the bubble), got passed the mighty Brooklyn Nets in a grueling seven-game semifinal and beat the surprising Atlanta Hawks in six games to win the East.
While it seemed at times that Bucks coach Mike Budenholzer was on the hot seat throughout the postseason, Antetokounmpo's loyalty, the acquisition of defensive guard Jrue Holiday and the clutch shooting of Khris Middleton -- and quite possibly the good luck of Jeff Teague -- all paid off in the end for Milwaukee.
Hopefully, rising stars Jayson Tatum and Jaylen Brown took notice, at least for the Celtics fans' sake on what it will take to return to the Eastern Conference Finals after making it three out of four years, only to suffer a first round playoff exit to sum up a mediocre 36-36 season.
Maybe a superteam isn't necessary as long as the pieces fit, which is exactly what the Bucks proved more than anything with their postseason run.
As Tatum looks to win a gold medal in Tokyo, he'll get a front row seat to pick the brain of NBA champions Middleton and Holiday, as they'll be his teammates with Team USA.
After all the changes already made so far with the Celtics front office and roster, the only question that remains is what else do the C's need in order to get back to the pinnacle of the NBA after a 13-year drought?
I guess only time will tell.
Until then, congratulations are in order for the Bucks on bringing the Larry O'Brien trophy back to the Eastern Conference.
Joel Pavón
Follow @Joe1_CSP