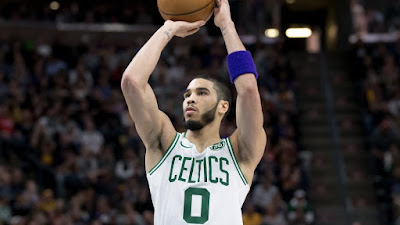 Jayson Tatum established himself as one of the NBA's elite scorers during the 2020-21 campaign, averaging a career-high 26.4 points game to lead the Celtics.
The two-time All-Star also netted 50-plus points in four games -- including the playoffs -- the most in franchise history by any player in a single season
Apparently, Tatum wants to take that next step offensively and potentially average 30-points or more per contest, which would require more trips to the free throw line.
According to Tatum's longtime shooting and workout coach Drew Hanlen, the Celtics forward is hoping to improve on attempting more free throws before heading into next season.

"I don't think there wasn't anything the Nets threw at him that he wasn't prepared for, but we noticed a big trend," Hanlen told Mark Murphy of the Boston Herald.
"When Jayson shot a high volume of free throws, he put up huge numbers. That's the big focus -- being able to get downhill more, which allows him to get to the line more, which also allows him to add another dynamic to his game. That's the focus."

Despite Tatum finishing 10th in points per game, he only averaged 5.3 free throw attempts. The Bulls' Zach LaVine (5.1) and the Nets' Kyie Irving (4.0) are the only other top-10 scorers that averaged fewer trips to charity stripe.
Tatum has never shot below than 81.2% on free throw attempts during his four seasons in the league, as his 86.8% percent free throw shooting this past year was a career high.
While not getting to the free throw line wasn't only an issue with Tatum in 2020-21, the entire Celtics roster struggled as well, after being ranked 25th in the league with 20.8 attempts per night.
Increasing trips to the free throw line would greatly improve the Celtics' chances of becoming a contender once again in the Eastern Conference.
Joel Pavón
Follow @Joe1_CSP