Team USA bounces back in blowout win vs. Argentina, Jayson Tatum sits out with knee soreness 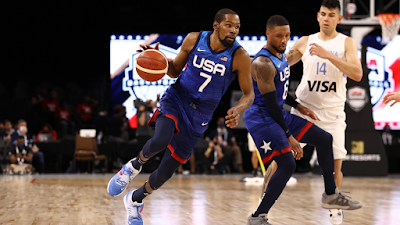 Team USA snapped their two-game skid with a 108-80 exhibition victory over Argentina in Las Vegas Tuesday night.
The win finally came to fruition for the US after playing a third game in four days and without Celtics All-Star Jayson Tatum, who sat out with right knee soreness and was listed as day-to-day, per Shams Charania of The Athletic.
While the injury doesn't seem to be a major concern, Tatum has clocked in about 28 minutes in each of the two games he's played so far, scoring 15 points on 4-of-7 from the field and 2-of-3 from behind the arc in a starting role against Nigeria, only to come off the bench in the loss to Australia -- missing eight of his 12 shot attempts and going 0-for-6 from 3-point range.
Meanwhile, Team USA hit 51.4% of their shots, led by Kevin Durant and Bradley Beal, who each finished with 17 points and six rebounds respectively. Zach LaVine added 15 points and five rebounds in the much needed win.

"I thought we sustained it pretty well in our game against Australia, and we competed well, rebounded, played defense, ran the floor and had good pace for one half, but then it dissipated through the second half," Coach Gregg Popovich said in his postgame presser. "Tonight, I thought we maintained (effort) pretty much throughout the game, so hopefully that's a sign that we are in a little better condition. … To play these games is huge for us. So, it was better, and it is getting better, bit by bit, every day."

Former NBA veteran and 41-year old Luis Scola led Argentina with 16 points, while Nico Laprovíttola added 13 points and Denver Nuggets guard Fucundo Capazzo had 12 in the loss. Argentina was held to 38.4% shooting from the floor and 9-of-29 from 3.
The Americans seemed to play more freely as they adjust to international competition and FIBA rules with each passing matchup.

"The biggest thing we have to realize is that it's not the NBA, and coach Pop keeps reemphasizing that to us every single day," Beal said. "It's more physical. These guys have been playing together for five, 10-plus years, so they have this experience and chemistry. We're trying to develop that in a short period of time. A sense of urgency is what we are preaching, but at the same time, every single day we have to get better. There's still a lot more we can improve on, but we're moving in the right direction."

Team USA will continue their exhibition schedule on Friday when they face-off in a rematch against Australia and Sunday vs. Spain. The US officially opens up their 2021 Tokyo Games against France on July 25th then Iran and the Czech Republic in group phase.
Joel Pavón
Follow @Joe1_CSP