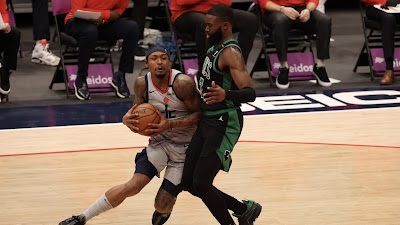 With the Celtics rumored to be interested in Wizards guard Bradley Beal, two ESPN analysts believe Jaylen Brown will not be the one traded to Washington for the All-Star.
While Beal reportedly may request a trade this week, the Celtics, where his childhood friend Jayson Tatum plays -- are one of the several teams he would welcome joining.
However, a trade offer that doesn't include Brown won't be an easy one to present to the Wizards. Zach Lowe joined NBA insider Adrian Wojnarowski to discuss potential packages.

"Is Boston going to offer Jaylen Brown? I don't think so," Lowe said, while Wojnarowski shook his head in agreement. "To me there's not much point in giving up one star for another, if you're Boston."

Lowe also mentioned that several teams don't necessarily have the assets to pull off a trade for Beal. Teams like the Warriors could offer draft picks and some young talent, or the Heat could make Tyler Herro available, despite his stock taking a hit during this year's playoffs.
Brad Stevens and the Celtics clearly are going to pursue Beal via a trade or free agency. Tatum's relationship with Beal has been well documented, as the two grew up in St. Louis. The two played in this year's All-Star Game and were set to be pair up for Team USA Basketball at the Tokyo Olympics, before Beal was placed into health and safety protocol.
As Lowe noted, possibly moving Brown for Beal is a big time decision and one the Stevens may not want to make considering the Celtics wing's upside since he's only 24 years old coming off a career year, where he made the All-Star team for the first time -- averaging 24.7 points and 6.4 rebounds while shooting 39.7 percent from 3-point range.
Despite no longer having a first-round pick in this year's draft (see Kemba Walker trade), Stevens could still somewhat put together a trade package without Brown, but a team like the 76ers has one asset in Ben Simmons that will be tough to beat when it comes to the Celtics.
Still, a team with three All-Stars in Tatum, Beal and Brown would put Boston back in Finals contention, only time will tell if a request is put in and a trade is actually made between now and Thursday's NBA Draft.
Joel Pavón
Follow @Joe1_CSP