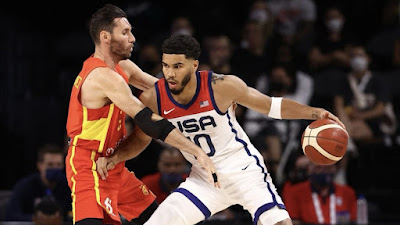 Team USA wrapped up their exhibitions games with a 83-76 victory over Spain 83-76 Sunday night in Las Vegas.
The Americans finished with a 2-2 record following their finale ahead of traveling to the 2020 Tokyo Olympics this week.
Celtics All-Star Jayson Tatum made his return after sitting out against Argentina on Wednesday with right knee soreness. Back in the starting lineup, the 23-year old forward struggled from the field -- scoring six points on 3-of-10 shooting -- but found other ways to contribute in the much needed win.
Tatum also grabbed six rebounds, dished out five assists, to go along with a steal and a block in 29 minutes of action.
With four days off since playing Argentina and with Friday's rematch against Australia being canceled "out of abundance of caution" surrounding health and safety protocols, Team USA concluded their mini training camp on a high note.
Damian Lillard led the Americans with 19 points and six assists in his best performance during these exhibition games. Kevin Durant added 14 points and Zach Lavine chipped in 13 off the bench.
Newcomer Keldon Johnson, who replaced Bradley Beal (health and safety protocol), caught fire in the second half scoring 10 points of his 15 points in the third quarter, which including an emphatic dunk. He finished shooting 7-of-9 from the field, plus had two steals and a block as well.

"Keldon Johnson just played a really solid basketball game," said USA coach Gregg Popovich during his postgame presser. "He shot if he was open, he made cuts to the bucket. When he did go to the bucket, he was very physical. And he was solid in the half-court defense. So, he had a very, very good night."

High praise from Popovich, who coaches Johnson on the San Antonio Spurs, the young guard was ready once his name was called after two weeks of scrimmaging against Team USA as part of the select team.

"Just being active, being a spark," said Johnson of his performance via a Zoom press conference. "I'm here to be the energy guy and bring life to the team whenever we need it. In the third quarter when I came in, we needed a spark."

Ricky Rubio had a game-high 23 points, while Willy Hernangomez scored 11 points and Marc Gasol added 10 points, five rebounds for Spain.
Team USA shot 43.1% from the floor and limited Spain to just 38.3% of their made attempts from the field.

"Our pace was better offensively," Popovich said. "I thought their physicality kind of set us back on our heels a little bit in the second quarter. But the pace improved in the third quarter, so we were able to get the ball up the court a little quicker, shared it better and thusly ended up with more open shots."

When Team USA departs for Tokyo this week, they'll be traveling with just nine of their 12 players on their final roster. After JaVale McGee was officially added to replace Kevin Love (knee injury), Jrue Holiday, Khris Middelton and Devin Booker will join the rest of their teammates once the NBA Finals concludes which could be as early as Tuesday night.
Joel Pavón
Follow @Joe1_CSP