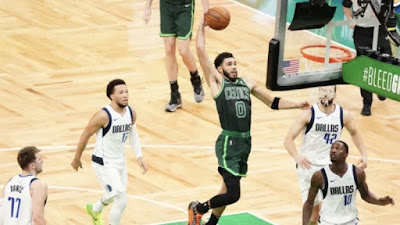 As the Celtics continue to make changes this offseason, Jayson Tatum is ready to keep ascending to superstar status while having Jaylen Brown as his All-Star teammate to bring the long-awaited 18th championship banner to the TD Garden rafters.
While Tatum prepares to seek a gold medal with Team USA in this month's Tokyo Olympic Games, the Celtics forward is set to begin his first year of a max rookie-scale contract extension he signed last fall.
After a 36-36 finish and a first round playoff exit in five games, Tatum welcomed Brad Stevens as president of basketball operations and the hiring of new head coach Ime Udoka for the upcoming season.

Joining Tatum in Las Vegas as part of Team USA's mini-camp is Udoka, which will help the two form a player-coach bond. Tatum says he was asked to give input by his former coach Stevens on potential coaching candidates and he strongly endorsed Udoka.

"I think it was big," Tatum said. "I think all of the candidates and finalists would have been great decisions. Extremely happy about Ime. I've known him for a little while. He's extremely motivated and I think everybody has a good feeling about this. I think this is going to be great."

Tatum and Brown both spoke to one another and shared ideas of what type of coach they believed was needed.

"They asked for input and I know from my perspective, I gave input, but never, 'You need to do this or you need to do that,'" Tatum said. "That's what they get paid to do. Whoever they hired, I will go out there and do what I got to do."

With many nay-sayers thinking that Tatum and Brown can even play or reach that next level together, Tatum said they have talked about their roles in helping the Celtics become contenders once again.

"That's the goal [to make each other better]," Tatum explained. "Both highly motivated and driven guys that want to be the best they can be. We just really want to win. We both really care about winning at our core. That's the start of it. We're going to try our best to figure it out."

Tatum added that the primary goal is to win an NBA title.

"That's always been the goal, to get there and win one," he said. "We always talk about all the banners that we have and seeing them every day at the Garden or at practice. That's all that really matters, especially in Boston, is getting another championship."

Following the trade of Kemba Walker, Tatum now becomes the Celtics highest paid player and at age 23, he understands the responsibility of being the face of the franchise. With two All-Star nods under his belt, a 53, 60 and 50-point performance in a six week span between April and May this past season, Tatum just wants to be one league's best.

With all that self-confidence, of course Tatum was not pleased after being left off this year's All-NBA teams. The snub, as many analysts looked at it, cost Tatum roughly $33 million in bonuses toward his max-extension, but he now uses the slight as motivation toward the 2021-22 campaign.

"Yeah, I was mad about it and it had nothing to do with the money," he said. "I just felt like I increased my assists, my points, my rebounds, I clearly had a better season this year than last season. With COVID and how it affected our team, I guess people held that against me. I clearly should have made one of those teams, but it will happen, but just get better for next year.

"How could you watch my game and the season I had and think I wasn't one of the best 15 players?"

In the meantime, Tatum and Team USA continue the quest towards a gold medal when they face Australia in their second exhibition tonight.
Joel Pavón
Follow @Joe1_CSP