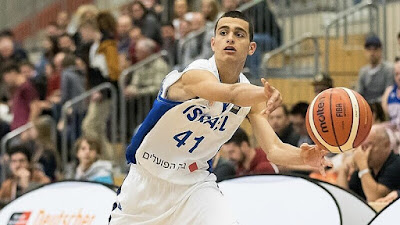 The Celtics draft pick Yam Madar will reportedly join the team's Summer League roster in Las Vegas, according to international reporter Moses Barda.
The 47th pick in the second round of last year's draft was stashed overseas this past season and is heading to Boston for workouts. Mader, Danny Ainge's last drafted player as the Celtics president of basketball operations, is a good ball-handler and passer with a defensive mindset.

"He's a player we watched over in Israel play quite a bit, and we'll see how it works out," Ainge said last year. "The plan will probably be to keep him overseas for at least another year and we'll evaluate him from there, but we're anxious to watch his growth and development as a player."

At 20-years of age, Mader just completed his third season at Hapoel SP Tel Aviv of the Israeli Winner League, where he averaged 17.1 points (50% from the field) -- 40.9% from 3-point range and 82.8% from the free throw line -- and 5.2 assists, while winning Most Improved Player honors.
The Celtics don't have a first-round pick this season, as they could be short on point guard depth after Marcus Smart and Payton Pritchard are the only two at that position currently under contract. While Mader may not be NBA ready just yet, there may be a roster spot for the 6-foot-3 guard if can prove his worth, as Brad Stevens looks to build around Jayson Tatum and Jaylen Brown.
Every NBA team will play at least four games over a 10-day span at the Thomas & Mack Center and Cox Pavilion in Las Vegas beginning on August 8th.
Joel Pavón
Follow @Joe1_CSP