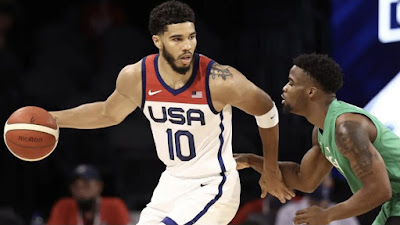 Team USA has gotten off to a bad start after being nearly 30-point favorites only to lose their first exhibition game against Nigeria 90-87 in Las Vegas Saturday night.
After just four practices and only two players returning from the 2016 Olympic games in Rio, coach Gregg Popovich and the rest of Team USA have unofficially begun their quest towards winning their fourth straight gold medal.

"I think with four days of practice, there were a lot of things I liked out there, but in a way, I'm kind of glad it happened," said USA's head coach during his postgame presser. "That loss means nothing if we don't learn from it. But it could be the most important thing in this tournament for us, to learn lessons from this and see what we did to move on, because it's a great group of guys, high character, and we'll figure it out."

Kevin Durant, who is a two-time gold medalist and was 39-0 in international competition prior to Saturday with Team USA, led the way with 17 points, while Celtics All-Star Jayson Tatum added 15 points and seven rebounds in the loss. Damian Lillard chipped in 14 points and five rebounds.
Nigeria featured seven NBA players, including Heat rookie Precious Achiuwa, who's rejection of a Durant baseline drive dunk attempt early went viral and Miami teammate Gabe Vincent -- finished with a game-high 21 points, while Caleb Agada netted 17 points in the win.

"I don't think any African team has been able to beat USA Basketball in an exhibition game or a real game," Nigeria's head coach Mike Brown said afterwards. "To try to get a little bit of momentum, not just for our group, because our group has worked extremely hard over the last couple of weeks, but to try to get a little bit of momentum for Nigeria, for the continent of Africa, because we feel like we represent more than just Nigeria. Really, for all the Black people around the world, to get that win and show that we can was a big moment for us."

Team USA was outrebounded 46-34, as Nigeria took advantage of FIBA's rules and played more physical than what the NBA stars are use to. Plus, the home team didn't shoot all that well, hitting only 41.3% from the field.

"I thought we got murdered on the boards," Popovich said. "The offensive end, if you don't get the rebound, you don't get stops and they're making threes ... people can set their defense, and it's a lot tougher for us. We didn't get anything easy ... when they got into us physically, we reverted to NBA ISO 1-on-1. That's not going to get it done."