Jayson Tatum's jersey is among the NBA's most popular 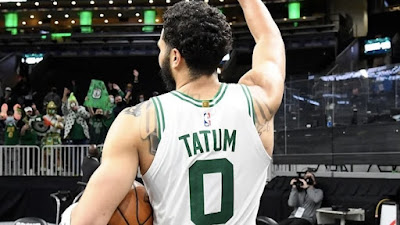 The NBA released its list of of the most popular jerseys based on NBAStore.com sales from the second half of the 2020-21 season and Celtics All-Star Jayson Tatum came in ranked as fifth.
Tatum's No. 0 jersey trails behind Lakers forward LeBron James, Bucks forward Giannis Antetokounmpo, Nets forward Kevin Durant and Mavericks guard Luka Doncic when it came to sales.

The NBA's most popular jersey list and team merchandise list... based on https://t.co/I0ypSvyq5i sales from the second half of the 2020-21 season. pic.twitter.com/Ve84P5Nrt1


Despite not being selected for any of this season's All-NBA teams such as Antetokounmpo (First Team), Doncic (First Team) or James (Second Team), Tatum had a more popular jersey than Steph Curry, James Harden and Damian Lillard -- who all finished in the top-10.
Tatum, 23, is coming off his best season as a pro which he averaged 26.4 points, 7.4 rebounds and 4.3 assists per game and topped 40 points in a game four times. The Celtics finished with a disappointing 36-36 record, making Tatum's popularity that much more impressive on a team that was eliminated from the first round of the playoffs in five games.
Joel Pavón
Follow @Joe1_CSP