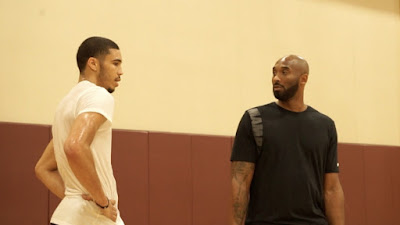 Kobe Bryant had quite the impact on All-Star Jayson Tatum, as the two got to spend some time together following the Celtics forward's rookie season back in the summer of 2018.
Tatum, who appeared on Kicks' Beyond the Press Podcast this week, recalls how his mentor taught him about sacrifice and what it takes to win at the highest level. Bryant also asked important questions on what he wanted to achieve as a player, according to Tatum.

It was these very conversations with Bryant that Tatum would used as a blueprint for his goals of winning an NBA championship, become an MVP and one day make the Hall-of-Fame.

"Everyone wants to win," Tatum said. "I want to be a champion. I want to be an MVP and want to be one of the greatest to ever play -- Hall of Fame. That's something I'm actively working on."

While Tatum never got the chance to play against Bryant before the Laker great retired, he still very much appreciated the advice given from one of the greatest to ever lace them up.
Bryant, who lost his life in a tragic helicopter accident 18 months ago, has influenced many of today's great talent of basketball players and Tatum was definitely no exception.
At age 23, Tatum looks to be well on his way to achieving many if not all of those goals that he set for himself after finally getting to meet and pick the brain of his boyhood idol -- Kobe Bryant.
Watch the full interview with Tatum below:
Joel Pavón
Follow @Joe1_CSP