Gregg Popovich on Jayson Tatum: 'He knows he can dominate people' 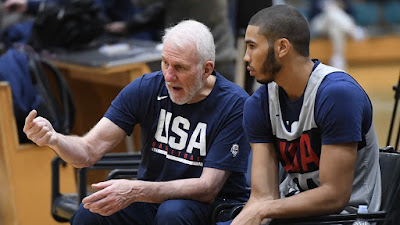 Jayson Tatum will become the first Celtic to play for Team USA in the Olympics later this month in Tokyo, since Larry Bird in 1992 for the "Dream Team."
While Tatum's journey to get to this point began two years ago in the 2019 FIBA World Cup. Team USA coach Gregg Popovich believes that the development of the Celtics All-Star over the past 24 months is the reason for him being on the final 12-man roster that will have an opportunity to compete for a gold medal.

"During that (2019) camp and from that time to now, under Brad's tutelage, he's become more of a two-way player," Popovich said after Team USA's first practice on Tuesday. "He's way more confident, he's developed more skills, he's, on top of that, more aggressive and he knows he can dominate people. He's much different going into this situation than before."

Unfortunately, due to an ankle injury, Tatum was sidelined during Team USA's key matchups in the medal rounds and it led to a seventh place finish. Popovich pointed out how much of an impact Tatum's injury had on the roster's chances.

"We were hugely disappointed when he got hurt (in the World Cup), let me put it that way," Popovich said. "He was going to be our go-to guy and he was just finding his legs, so to speak. Not totally confident, not realizing maybe how good he could be at both ends of the floor."

This time around Popovich and Team USA's coaching staff plan to make defense a focal point when it comes to Tatum because of his much improved play on both ends of the floor.

"Let's just say that Jayson's probably surprised at the attention I gave him defensively," Popovich said. "There aren't that many two-way players in the league -- genuine. Some think they are, but you can count them on one hand. And he's got the possibility to be one of those."

Team USA is currently without Khris Middelton, Devin Booker and Jrue Holday, who are playing in the NBA Finals, which means Tatum gets to play extra minutes in preparation for international competition.
Tatum and the rest of Team USA are in Las Vegas for training camp through July 18 with five exhibition games scheduled against Nigeria, Australia, Spain and Argentina. After that they'll travel to Japan for the Olympic games, as Tatum and his teammates looks for redemption after injuries kept him and Team USA out of the final medal round back in 2019.
Joel Pavón
Follow @Joe1_CSP