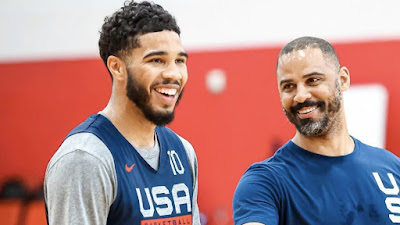 Jayson Tatum is excited to play for Team USA in this month's Tokyo Olympics, as he was able to address the media on Wednesday about a variety of topics.
The Celtics All-Star spoke about playing with his best friend Bradley Beal once again, after the two St. Louis natives who attended Chaminade High School, are now Olympians with an opportunity to possibly win a gold medal.

"Playing with my big brother, two guys from the same neighborhood, same high school, going to the Olympics from St. Louis, that's like a dream," Tatum told reporters. "That is amazing."
"I don't know if that's ever happened for USA Basketball," Beal added.

While both Tatum and Beal have been repeatedly asked about playing together over the past few years, a reporter asked how much recruiting goes on when NBA stars team up during international competition.

"Probably a lot,"  Beal said through his Zoom presser. "I don't know. It depends on who is a free agent or not."

Beal, who can become a free agent in 2023, was wise enough to pretend like he didn't know and simply didn't give up much information when it came to being asked about forming connections.

"For the most part, we can't mix that in right now," Beal said. "We're focused on one goal at hand, and that's bringing back the gold medal. Granted we all have our respective individual goals and talents once this is done -- we can address those issues then."

Tatum and Beal are just happy to be playing together in any capacity whether it's in an All-Star game or competing in the Olympics.

"This is definitely exciting for both of us. I'm happy about his growth," Beal said. "I'm excited to see him on the global stage just as well as myself and everybody. We have a really good team, but Jayson and I have a special relationship and I'm looking forward to it, man. It'll be exciting."

"[Beal] was the mentor, older brother that I didn't technically have in-house, somebody that just accomplished everything that I was trying to do," Tatum said. "I've seen how to do it firsthand.

"We just want the extreme best for each other and just two guys that play at a very high level that always are pushing each other. He scores 50 or something, I'm trying to do it and vice versa. That's just kind of the relationship we have."

So what made Tatum want to accept an invitation to play for Team USA this time around? Its simple really for the Celtics forward, who played on the roster that finished seventh in the 2019 FIBA World Cup -- redemption. An ankle injury kept him sidelined during the medal rounds and according to coach Gregg Popovich, the team was disappointed to not have a key piece to wrap up their tournament run on a high note.

"So much time is invested from training camp, spending all this time together, long flights, going to different countries, so I was hurt emotionally when I hurt my ankle and wasn't able to play," he said. "I wanted to be out there with those guys and finish what we went there to go do.
"It didn't happen, so I think that's one of the reasons I was so eager to come play this time around. I kind of had a sour taste in my mouth after the last experience."

Tatum will wear No. 10, which carries an important significance because of Kobe Bryant. The late Hall-of-Famer wore the same number during the 2008 and 2012 Olympics. For Tatum to wear the same jersey number as the player he grew idolizing was the best way to honor his hero.

"With this being the first Olympics since we lost him, it holds that much more value," Tatum said. "It's not something I take lightly."

With so many changes that have taken place since the Celtics were bounced out of the playoffs at the hands of the Brooklyn Nets, beginning with Brad Stevens becoming the new president of basketball operations just 12 hours after the season ended -- which was followed by the coaching vacancy being filled by Ime Udoka (along with a couple of new assistant coaches) and Kemba Walker being traded for former teammate Al Hortford -- Tatum was finally asked about the makeover of his team so far.

"It was a lot at first," Tatum said. "All the changes, especially with the coaches and front office. But change is good sometimes. I'm excited about our new coach, Ime."

Tatum also noted that he approved of all of the head coaching finalists during the team's search.

"I had somewhat of a relationship with all of them, and I basically told him you can't go wrong," Tatum said. "That's their job, the front office to make those decisions, and it's my job to go out there and play.
"From the conversations that I've had with [Udoka] since he's gotten the job, I can tell he's really, really excited. It's going to be fun, and we're going to try to accomplish something big."

Though Tatum says he hates to see one of his "close guys" in Walker go, he did wish the point guard all the best and is pleased to have Horford as a teammate again.

"Happy to have Al back," Tatum added. "He looked better in green anyway."