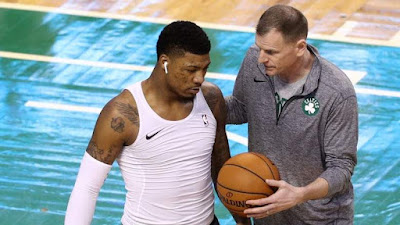 Longtime Celtics assistant coaches Jay Larranaga and Jaime Young's contracts did not get renewed Friday, according to Adam Himmelsbach of the Boston Globe.
New Celtics head coach Ime Udoka will add Spurs assistant Will Hardy to his staff and C's assistant Joe Mazzulla is also exected to stay, per Himmelsbach's report.
Young's departure comes after 20 years with the Celtics, when he first came aboard as part of the team's video staff under then head coach Jim O'Brien. He was then promoted to assistant coach during Doc River's tenure, but left in 2013 to join Rivers with the Clippers before returning to Boston as an assistant once again under Brad Stevens.

"The experience was incredible," Young said. "You don't usually get to be in one place this long in this business. It was everything anybody could've wished for. Seventeen years in the playoffs, five Eastern Conference finals, two Finals, and one championship."

Larranaga joined the Celtics at the start of Rivers' final season in 2012 before becoming the lead assistant on Stevens' staff. Three years ago, Larranaga was a finalist for the Hornets' head coach vacancy. He also interviewed for the Celtics' head coaching job last month -- as he's played a crucial role in the development of Jayson Tatum and Jaylen Brown in becoming All-Stars.

"I just really appreciate the opportunity I was given to work for the best franchise in the NBA for the last nine years," Larranaga sent in a text message to Himmelsbach. "I learned so much from both the players I coached and the people I worked with. I loved so many things being a part of the Celtics and take away only good memories as I move on to the next chapter in my coaching career."

Young and Larranaga are the latest Celtics assistant coaches, along with Jerome Allen, who's heading to the Pistons as an assistant under Dwayne Casey, to depart the C's this offseason.
Hardy, 33, comes to the Celtics after 10 seasons in San Antonio, seven of which he spent with Udoka. He and Udoka were also on Team USA's staff in 2019, coaching Jayson Tatum, Jaylen Brown, and Marcus Smart at the FIBA World Cup. A native of Virginia, Hardy has local ties as he played college basketball at Williams College in Williamstown, Massachusetts.
ESPN's Adrian Wojnarowski reported on Tuesday, that Udoka is looking to add Pacific head coach and former NBA veteran guard Damon Stoudamire. While the two have been longtime friends, Stoudamire also has 12 years of coaching experience on the pro and collegiate level.
Joel Pavón
Follow @Joe1_CSP