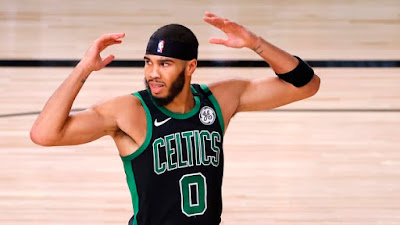 Jayson Tatum has reportedly agreed to a five-year, maximum extension worth up to $195 million, according to ESPN's Adrian Wojnarowski.
Boston finalized details of the full designated rookie max extension with Tatum and his agent Jeff Wechsler late Sunday afternoon. The contract, which goes into affect at the start of the 2021-22 campaign, gives the Celtics All-Star a player option for the 2025-26 season, the final year of the deal.


While the full designated rookie max extension is worth $163 million, there are escalators if Tatum makes future All NBA teams that could bring his total earnings to $195 million -- which would be 30% of the cap based under the "Rose Rule" -- instead of the usual 25% or less.

Projected salaries for Jayson Tatum if he qualifies for the 30% max extension:


The extension negotiating window began on Friday and if a deal was not reached by Dec. 21, the 22-year-old Celtics forward would have became an restricted free agent next summer. He joins Jazz guard Donovan Mitchell and Kings guard De'Aron Fox as players from the 2017 draft class to receive similar extensions over the last 48 hours.
Tatum emerged as the Celtics' leading scorer this past season, averaging career-highs in points at 23.4 per game (40.3% from 3), to go along with 7 rebounds and three assists per contest. He also made his first All-Star appearance and named to the All-NBA third team this year.
The Celtics now have their two cornerstone young stars in Tatum and Jaylen Brown, who signed his $115 rookie contract extension in the summer of 2019, locked up at least the through the 2023-24 season.
It was quite the weekend of free agency for the Celtics after losing Gordon Hayward to the Charlotte Hornets, but has since recovered better than expected following the reported signings of big man Tristan Thompson and veteran guard Jeff Teague to deals on Saturday.