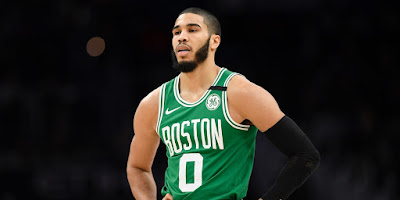 It's been quite the year of high praise for Celtics forward Jayson Tatum during the 2019-20 season, even NBA legends predict that the future is bright for the young All-Star.

The Celtics will enter the 22-team NBA "bubble" at Disney World this week as one of the favorites to win the Eastern Conference. Future Hall-of-Famer Paul Pierce, ESPN's Jalen Rose and Kendrick Perkins were one of the firsts to voice their opinions nationally about Boston's chances of a deep playoff run to the Finals.

While the Celtics are the only team in the league with three players averaging 20-plus points per-game in Tatum, Kemba Walker and Jaylen Brown -- with Gordon Hayward not far behind at 17.3 points, Chicago Bulls icon and ESPN NBA analyst Scottie Pippen believes Tatum is capable of taking on the challenge to become Boston's leader on an already championship contender.

Pippen joined ESPN's The Jump on Monday and answered Rachel Nichols' question: "Do you think Jayson Tatum is already, now, capable of carrying that best player on a championship team title?"


"Rachel, I really do. I think this has been a breakout season for Tatum," Pippen said. "He started out this season sort of on a mission to separate himself from the other players who've grown and developed, as well as really showing some leadership by becoming an All-Star this season. His scoring was really starting to peak right there (before the season was paused) -- he again separated himself a little bit from the other players to show he was going to be the go-to guy, the offensive leader for that team. I think if this team is to make a run, it has to rely on Tatum's ability to carry them offensively, and I feel like he's totally ready."

It doesn't get any better than when a six-time NBA champion like Pippen says you're ready to take your talents to the next level.

At 22-years of age, Tatum leads the Celtics in scoring with 23.6 points per contest -- a 7.9-point increase from a season ago. But Brad Stevens knows he has plenty of options on a roster that has great overall depth offensively, especially late in the fourth quarter.