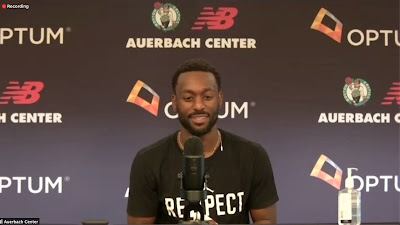 When the NBA suspended its season back in March, Kemba Walker's health was one of the Celtics' biggest concern prior to finishing out the regular season.

Walker, who missed six games after the league's All-Star break, had been dealing with a nagging left knee injury throughout his first season in Boston and took advantage of the newfound downtime due to the conronavirus pandemic.

Throughout the past three months, Walker spent time rehabbing in Charlotte -- a decision he says made a big difference.

"It was super important for me," Walker said Wednesday. "I really, really need to get that break. It definitely helped me get back to myself and start to feel comfortable on my knee. It was a very unfortunate time but it was in my best interests, for sure."

Although Walker did get his left knee drained before the shutdown, strengthening his knee has been always been a goal of his since the season's suspension. Uncertainty surrounding the resume didn't slow the All-Star point guard down from working out.

Walker, who spent some of his time in quarantine with teammate Grant Williams, says he can't wait to see the rest of his teammates in Orlando. He's confident that the tight-knit group will pick up right from where they left off.

"Everyone is excited to see each other," Walker said. "From day one with this team, our vibe, our chemistry was already there for a very long time. So the first time you see anybody, it's like we were just together yesterday. That's just the team that we have, we're so close."

Celtics mandatory workouts began on Wednesday at the Auerbach Center, as Boston and 21 other NBA teams will head to Disney World to restart the 2019-20 season on July 30.