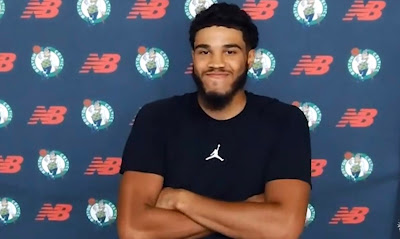 Jayson Tatum was in the middle of his best stretch of basketball as a pro prior to the NBA suspending the season back in March.

In the 10 games following Tatum's first All-Star game appearance, the 22-year old averaged 29.9 points, while shooting 47.2 percent from the field and 46.8 percent from behind 3-point arc to go along with 7.9 rebounds and 3.1 assists per contest.

Tatum, who has never been short on confidence, was beginning to scratch the surface of being a rising young star. But as good of an All-Star season that the Celtics forward was enjoying, Tatum understands that there are still levels to be reached and continue to grow as a player.


"I know what I'm capable of, what I think I'm capable of, what I'm striving for," Tatum said during a video conference call just prior to the Celtics' practice Friday night. "That's the edge that I have for myself. I step on the floor, I think I'm the best player every night. And I think that confidence – I'm sure a lot of guys feel that way – but I think that's the mindset I take and just knowing that I can do it, and to just keep pushing it."

Despite being in the league less than three years, Tatum's approach to the game is to keep an open mind in learning and block any mental distractions along the way.


"Just challenging myself – I always set new goals," Tatum said. "Setting the standard extremely high, not caring about what other people think of me, whether it's really good or whether they think (my play before the hiatus) was a fluke or it was just a short time span. That doesn't really bother me."

The Celtics come into the season restart as a top-five ranked team in both defense (fourth at 106.2) and offense (fifth at 112.3) -- the Los Angeles Lakers and Milwaukee Bucks are the only other teams ranked among the top-five in both categories.

While the Celtics look to get back to that level of play and rebuilding those habits, Tatum has enjoyed the team's mini-training camp in the Disney World bubble so far and looks forward for to practices.


"I'm really just excited," he said before hitting the practice court for an intrasquad scrimmage. "I'm enjoying being at practice, seeing the guys, playing with them. This is the most I've enjoyed practice since I've been in the NBA. I'm just happy to be back playing basketball."

Coach Brad Stevens will look to put his roster's conditioning to the test when they face the Oklahoma City Thunder next week in the Celtics' first of three intersquad scrimmage games.


"I'm ready to play, said Tatum. "I know it probably won't look perfect when we first start playing. That's not the goal. The goal is to play when the playoffs start; that's when you want to hit your stride. Once it gets playoff time, you really want to start clicking as a group."