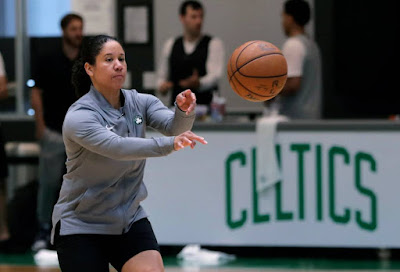 
The Celtics have a vacancy, as they'll be able to bring another assistant coach to Orlando to replace Lawson. According to head coach Brad Stevens, Brandon Bailey has been chosen as a replacement on his coaching staff going forward in the bubble.


Brandon Bailey will replace Kara Lawson in the Bubble for the #Celtics. Lawson is the new HC of the @DukeWBB team.
— A. Sherrod Blakely (@ASherrodblakely) July 13, 2020


Lawson will stay with the team for a few more days while Bailey makes his way to Disney's ESPN Wide World of Sports Complex.

Bailey, who is also is in his first season as a Celtics assistant coach after spending the previous two seasons as head coach of the G-League affiliate Maine Red Claws, didn't initially travel with the team to Orlando, due the NBA limiting the number of staff each team could have under its season restart plan.

Stevens said the Celtics won't officially replace Lawson until the offseason but will give a promotion to video coordinator Tony Dobbins, who will have a coaching role next season and be joining the Celtics on the bench during games.

Lawson was a favorite among the Celtics players this season and clearly will be missed.


"Kara is always known for putting smiles on players' faces," said Robert Williams on Sunday. "She stays in your ear. Even though she may not be your personal coach, she always keeps on me, ask me how I'm doing, anything I need to talk about. Duke is getting a great head coach."

Marcus Smart recalled how he developed a relationship with Lawson on and off the court in the short time together and it began the moment she chose the Celtics veteran to work with immediately.


"This is why our bond has been strong, she had the option to work with anybody," Smart said via a video call on Sunday afternoon. "When she told Brad the reason why, she just liked the way I play my whole game. So that really hit home for me and it meant a lot."

Stevens also spoke about a conversation he had with Lawson just months prior to her being offered the Duke coaching job.


"We actually went on a walk – Kara, Tracy and I – a couple of months ago," Stevens said. "And we were talking about what she'd be interested in the future, and being the head coach at Duke was one of the things that came up. So it's really cool that she's getting a chance to do that. She'll be terrific."

In a statement via ESPN, Lawson expressed that "it is a dream come true for me. I have wanted to be a coach since I was a kid. To have an opportunity to lead a group of young women at a prestigious university like Duke -- I have run out of words; it is unbelievable and very exciting."