Kemba Walker 'looked good' in his first game back 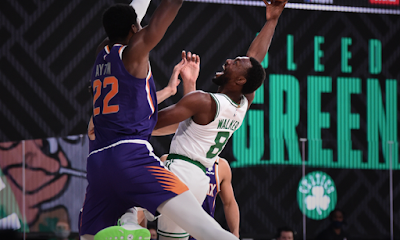 When Kemba Walker drove past one Suns defender, charged towards two others before absorbing contact from DeAndre Ayton and converting a layup for a three-point-play opportunity, you could almost hear the massive sigh of relief from Celtics fans across the city.

Walker made his 'NBA Bubble' debut Sunday afternoon. After going through his pregame workout, he was approved by team trainers to play under a minutes restriction against the Suns in the Celtics' 117-103 win.

Walker finished with six points on 2-of-6 from the floor in over nine minutes.

"Nine-to-10 minutes was kind of the time we had for him to play, like we said he's going to be on a minutes restriction when we start playing seeding games but I thought he looked good," Brad Stevens said Sunday after the win. "I thought he had his burst, I thought he played hard defensively; created caos on a couple of different plays.Offensively, I thought he got to the rim and/or got his shot. (We're) encouraged by it."

Still, it's going to take some time for Walker to get used to his new situation. For a veteran point guard who's recovering from his first significant injury, he's not used to getting limited playing time -- something that's only going to get more frustrating when the Celtics begin their eight seeding games later this week.

When asked if he wishes the minute restriction was revoked, even for an exhibition matchup, Walker's response was obvious.

"Of course," Walker said. "Yeah, I would love to be like 'you know what? I don't care about no minutes restrictions, no anything of that nature,' but obviously I can't so I have to be smart about things. At this point, it just is what it is. They know. I want to be there for my teammates when we're in the playoffs -- hopefully, by then -- the restrictions or things of that nature is completely off."

The All-Star point guard certainly beat the eye test. Walker wasn't hesitant or stagnant on either end of the floor and drew teammates to their feet as they cheered, following Walker's strong finish as he made his way to the free-throw line and converted the and-1.

Jayson Tatum, who netted 17 points Sunday, said it was great to have his teammate back in the starting lineup.

However, Walker knows the bigger picture is what is most important. He believes the Celtics have a chance to win an NBA title and that the hard work that's put in now can ultimately lead them down that path.

"I don't make goals, honestly," Walker said. "That's just something I never really did. I just work hard and, you know, hope that my hard work pays off. Do I have dreams of winning a championship? No question. I do think we have that opportunity. I think we'll get there one day but we just have to keep working towards that as a team, keep getting better. Do what we can to go toward that dream."

Walker will look to give it another go against the Rockets Tuesday night.