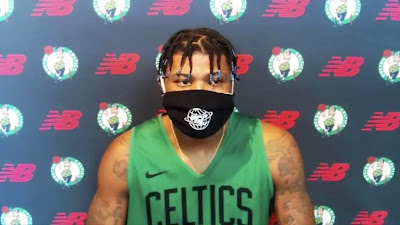 Smart repeated the phrase, "Justice for Breonna Taylor," six times during a one minute and 21-second media session from the Disney World bubble. Taylor, a Louisville EMT, was shot and killed in March by four Louisville Metro Police officers who executed a no-knock warrant for her apartment.

When Smart was asked if he was one of the several players, along with CJ McCollum that was on a call with Taylor's mother a few days ago, Smart kindly responded: "I was. And I'd just like to say justice for Breonna Taylor."

On Sunday, Smart's teammate Jaylen Brown also spoke about Taylor's death and systemic change to close out his video session with the media.

Brown added, "For us, equality is demanded and Black Lives Matter. And Breonna Taylor is an example of a Black life that was taken because of how the system has been laid out. And we're going to continue to protest and continue to feel some type of way about it. It's unfortunate, but these conversations need to continue to be had, for sure."