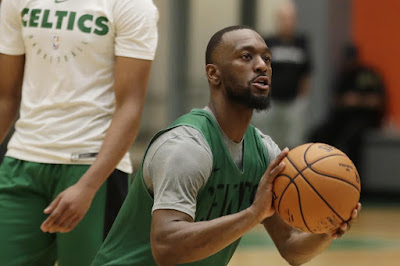 The Celtics continued their plan to move slowly when it comes to Kemba Walker and his left knee, as the All-Star guard was held out of practice on Sunday.

Walker watched from the sidelines while the Celtics had their first "hard practice" since the team arrived at the Disney World bubble Wednesday night.

Brad Stevens spoke about the team's plan of getting Walker into the best shape physically for the playoffs. The Celtics coach was pleased with what he saw even without his starting point guard and gave high praise to his rookies, especially Tremont Waters.


Brad Stevens had some praise for the rookies today: "Carsen was terrific Day 1. Romeo's continuously had good moments. Tremont's been Tremont. He can make you look bad if you're not focused in that moment. He's pretty special with that."
— Boston.com Celtics News (@BDCCeltics) July 12, 2020


Stevens admitted on Saturday that Walker would "most likely" be put on a minutes restriction when the Celtics tip-off their eight "seeding games" schedule against the Milwaukee Bucks on July 31, so there won't be any setbacks come the postseason.

Walker in his first campaign with the Celtics after signing a four-year, $141 million deal last summer, is averaging 21.2 points, 4.9 assists and 4.1 rebounds. Despite being one the league's more durable players, the 30-year-old has missed 14 games this season - mostly due to draining his left knee.

The Celtics will practice again Monday before having a day off on Tuesday.


Brad Stevens said the Celtics will practice tomorrow and then have a day off on Tuesday.
— Boston.com Celtics News (@BDCCeltics) July 12, 2020