Marcus Smart feels no side effects of COVID-19, says 'everything is as normal as it's going to get' 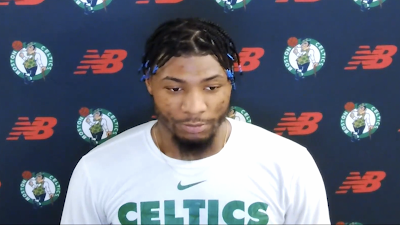 It was back in March when Marcus Smart tested positive for COVID-19, as he was the only member of the Celtics to catch the virus.

Smart was part of the first wave of NBA players to test positive after the league suspended play, but the Celtics guard never showed symptoms at any point while he had the coronavirus.


"For me, it was like a surprise," he said at the time on CNN. "I feel fine. I don't have any symptoms, haven't had any symptoms. For me when they told me I had it I was like, oh, wow. It definitely really makes you alert to what's going on."

As the league is preparing to restart their season more than four months later, many questions have been asked to players who have recovered from COVID-19, especially related to any type of impact on their breathing -- since the virus has been known to attack the lungs. Smart says he has not felt any side effects up to this point.


"I thank God for that. Everything is copasetic for me," Smart told reporters via video after the team's Wednesday practice. "My breathing is fine, my heart is fine. It just feels good to be back out here. I think I'm back to myself if not even getting back to being where I was before the season stopped. So for me personally, nothing’s wrong. Everything is as normal as it's going to get."

Smart still undergoes testing daily to make sure he has enough oxygen in his blood, which is a sign that his breathing and heart are in fact fine. While there is a feeling that those who have had the virus are now immune to it, that has yet to be proven.

It's still unknown what kind of impact long-term COVID-19 will have on athletes that have recovered from it, despite not displaying any side effects weeks and even months later. Smart knows how serious this virus is and hopes his fellow NBA players walking around the Disney World "bubble" in Orlando understand that same message.


"Us older guys, and especially guys who have had COVID, like me, really express and really chewing down on the fact to take it as serious as possible," Smart said last week.

"I think the younger guys are going to have some skepticism but I think as veteran guys and other guys on the team, we'll have to do our part to keep those guys, I guess, in a sense, under control and just understanding that although you might not take it as serious, but you are putting other people at risk and they take it seriously, so you have to respect them."