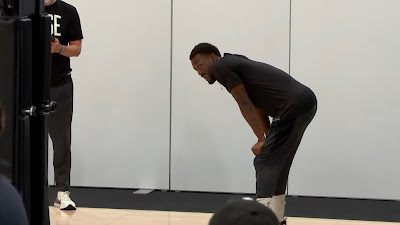 Stevens insists that there is no concern when it comes to Walker's sore left knee, especially because they're taking their time with his conditioning.


"With regard to Kemba getting back into it, I think 'worrying' is a strong word," said Stevens. "I think there's a lot more to worry about in the world right now so, when he gets back, we'll get him as acclimated as we can. I don't think it'll be as fluid in our first scrimmage, or whatever the case may be, as maybe three weeks from now. But there's time to do that. He practiced the first 50 minutes of today's practice, so he's done a lot more over the last few days."

Walker spent a week strengthening his knee and had not participated in any team practices since arriving at the Disney World bubble until a few days ago, when he spoke to the media for the first time and admitted to feeling pain on the side of his left knee during individual workouts in Boston.


"I'm not really concerned much, honestly, because I'm trending upwards and I'm getting better and I'm getting closer to a return. So, yeah, I'm fine," Walker said following a light participation during Thursday's Celtics practice. "I'll be back better than ever, I think."

The Celtics, who face the Oklahoma City Thunder Friday, had practice on Monday and Walker was seen participating in his first back-to-back session since being in Orlando.