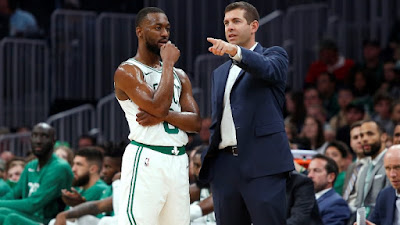 Kemba Walker reminded the media last week how much he took advantage of the NBA being on hiatus for nearly four months.

Walker was not only able to rest but he also rehabbed his left knee, something the Celtics All-Star guard really needed during the time off.


"It was super important for me," Walker said following the team's first mandatory workout at the Auerbach Center. "I really, really need to get that break. It definitely helped me get back to myself and start to feel comfortable on my knee. It was a very unfortunate time but it was in my best interests, for sure."

On Friday, Celtics coach Brad Stevens admitted that his staff is being cautious with Walker's return, as the team is preparing at Disney World's ESPN World Wide of Sports Complex resort for the 2019-20 season to restart in three weeks.


"We're going to move very slowly with Kemba Walker and let him strengthen (the left knee)," said Stevens following the team's first practice in Orlando. "And make sure that he's all good to go as we enter the seeding games and obviously, the playoffs."

Walker, who has been one of the league's durable players for nearly his entire NBA career, has missed 14 games this season after only sitting out a total of six over the past four campaigns combined.

Prior to the league suspending games back on March 11, Walker missed six out of the last 10 contests for the Celtics due to his left knee needing to be drained of fluid.

Stevens reiterated Saturday morning that the goal is make sure Walker's knee is strong as possible and most likely will be playing on a minutes restriction during the eight "seeding games," so he'll have free range for the playoffs -- which could be a deep run for the Celtics.


"The biggest thing that we don't want to do is go through a typical training camp, which is usually a ramp-up session for most people to get to where they need to be," Stevens said after the Celtics second practice. "For him, we need to make it a ramp-up session so he doesn't have setbacks once we start playing."

Brad Stevens says Kemba Walker will "most likely" start playing with a minutes restriction through the team's scrimmages and at least the first week or so of seeding games: "The goal is to not be limited once the playoffs come around."
— Boston.com Celtics News (@BDCCeltics) July 11, 2020

The Celtics resume their season against the Milwaukee Bucks on July 31, while the playoffs are scheduled to tip-off on Aug. 17.