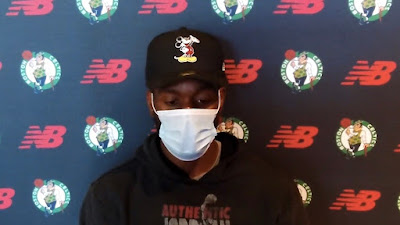 While Kemba Walker has only played nine minutes of basketball in the 'NBA bubble' so far, the Celtics All-Star is committed to following the team's medical staff plan.

Despite a four month lay-off, Walker continues to deal with a sore left knee that kept him out 10 games between January and March.


"Yeah, it's been frustrating," Walker said Thursday to reporters via a video call with reporters. "I've been going through this pretty much most of the season, even before this bubble stuff. So, it's been something that's been nagging for a little bit now.

"Unfortunately it's still bothering me even after I've put in a lot of work and did the necessary things to try to get it right."

Walker is expected to be limited to play 15-20 minutes when the Celtics face the Bucks in Friday's seeding opener, according to Brad Stevens. It's been four days removed since the team's 117-113 scrimmage win over the Suns, where Walker chipped in six points on 2-of-6 shooting in less than 10 minutes of action. Still, the C's coach seems quite encouraged with his starting point guard's progress.


"His knee is the strongest it's been since he got here in September," Stevens said on Wednesday.

Of course, Walker isn't too thrilled about the idea of resuming the 2019-20 campaign on a minutes restriction, but he knows it will pay dividends come playoff time.


"This is the first time in my career I've ever had to go through this, so it's kind of tough," Walker said. "But I'll get there. I know what it's about. I know it's about me getting better for the playoffs. I'm working every single day to get myself prepared to play big minutes in the future."

Walker also pointed out that due to the warm weather in Orlando and not having to travel at all, especially on long cramped plane rides, has really made a difference in his left knee not swelling as often.


"It's something that a lot of athletes go through. Injuries happen. You're not going to feel your best all the time," Walker added. "I'm just staying positive. That's really all I can do."