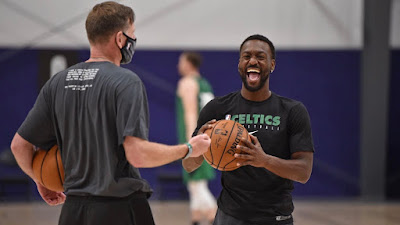 Stevens admitted that Walker did not scrimmage with teammates, as he was set to get his sore knee reevaluated Wednesday during Boston's off day, with the hope that Walker will engage in live action practice on Thursday.

"I don't think he will play against Oklahoma City, that will all depend on how much he'll practice the day before," said Stevens. "But he's pretty darn close right now."

#NEBHInjuryReport Kemba Walker (knee) is unlikely to play in Friday’s scrimmage vs. OKC, but went through an hour of practice today and “is pretty darn close,” according to Brad Stevens. “He’s been going every day to some level in the last five days ... He’s felt great.”
— Boston Celtics (@celtics) July 21, 2020


The Celtics have made sure to have Walker slowly return to practices since arriving in Orlando to help strengthen his left knee, and the fact that the veteran point guard could possibly play in a scrimmage is an encouraging sign with the playoffs beginning next month.


"He's been going everyday to some level in the last five days," said Stevens. "Initially, we thought it would be more of every other day. He's felt great, he's been able to add strength and those were the two things we needed to prioritize."

Besides Walker and rookie Tremont Waters, who is still in the back-end of concussion protocol after suffering a concussion late last week, Stevens says there are no other injuries to report so far


"[Gordon Hayward] has been healthy the entire time," said Stevens. "He's practiced every day. He hasn't missed a drill in two weeks – he, [Jayson] Tatum, Jaylen [Brown], Marcus Smart, all those guys have been the same way in that regard, which has been really encouraging and we feel very fortunate as we kind of enter this time now where we're scrimmaging."

Stevens also noted that the rest of the Celtics starters will play in shorts stints when they tip-off their three-game scrimmage schedule against the Oklahoma City Thunder Friday.