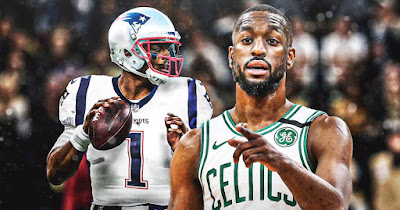 Walker and Newton both spent their entire careers, respectively, as cornerstone franchise players in Charlotte. Walker, who was drafted by the Hornets in 2011, was selected only two months after the Panthers, with the no. 1 overall pick, drafted the Auburn product as their new starting quarterback.

Walker was asked about the Patriots' signing Wednesday afternoon at the Auerbach Center.

"I know Cam, obviously," Walker said. "He was doing his thing and I was doing mine (in Charlotte). We were actually both with the same shoe company when we first came out so that's how we really got to know each other. When I heard the news, I mean, it's just crazy. You know, both of us came in the same year, spent the same amount of time there and now we're both here in Boston which is insane to me."

In light of the news, Walker hopes to take in a Patriots game one day, when things get back to the way it used to be, the Celtics point guard added. He believes the city will embrace Newton and is looking forward to seeing it all play out.

"I'm happy for him," Walker added. "New beginnings, obviously and I know the fans out here are going to love him. They're going to love him a lot. I'm looking forward to, hopefully, when the world opens back up, getting out there to a game and supporting. It's exciting news."