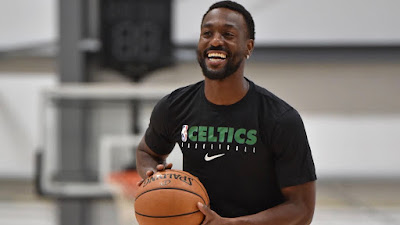 While the Celtics have been preparing to resume their season for the past two weeks in Orlando, Kemba Walker was using individual workouts to strengthening his left knee.

That all changed on Thursday, as Walker participated in his first live action practice since arriving in the NBA bubble. The Celtics All-Star guard spoke afterwards on how his knee responded to the session.


"I felt really good (today), actually," said Walker. "It was really fun to get out there with my teammates. The knee feels good. I'm trending upwards."

Walker, who admitted last week that he felt pain in his knee after arriving in Boston to workout in late June despite the long layoff, says he's happy with some of the results from the Celtics' conditioning plan.


"Now I feel good," Walker says. "They made a great choice keeping me out of some of these practices."

The veteran guard was asked if he'll be at back to his All-Star level at some point before the playoffs, Walker said assisting in the growth of his two rising star teammates Jayson Tatum and Jaylen Brown -- which in return will help the Celtics make a deep postseason run means more to him than anything else.


"I knew what I was getting myself into when I came here," said Walker. "I knew how much room for improvement these guys had, and those two guys are two special talents. It's not a problem for me at all. I know I'm being part of the growth. It's fun. We're playing fun basketball.

Walker showing great leadership is nothing new, especially during his days in Charlotte. But he's fully taking advantage and embracing a great situation by not changing who he's always been.


"I'm just kind of being myself," said Walker. "I'm not even looking at it like that. It's definitely a different opportunity for me, a situation I kind of haven't been in but, at the end of the day, it's still basketball.

Earlier this week, Celtics big man Enes Kanter revealed a message that Walker delivered to his teammates after the Celtics arrived at Disney World.


"Actually, we had a [team] meeting and, in the middle of the meeting, [Walker] stepped up and said, 'Listen, man, we have something really special in this locker room. We are like brothers. So let's just go out there, let's compete, have fun, and win this championship. Let's show the whole world that we can do it,'"  Kanter said on "The Enes Kanter Show" podcast.

Kanter, who credits Walker as a major reason for the Celtics' improved chemistry this season, says that even being limited during practices Walker has been vocal and the team is responding.


"Kemba, he lets his game talk. That's like the best way to put it," said Kanter. "But when he comes out and says, 'OK, hey, we have something very special in our locker room, let’s go out there and show the whole world that we have enough in our locker room to win the whole thing,’ that will for sure get you going, get you excited, gets you like, ‘OK, let's do this.'"

The Celtics will face the Oklahoma City Thunder without Walker on Friday in their first of three scheduled scrimmages. According to the team's health report, everyone practiced on Thursday and the rest of the 16 players will see action tomorrow.