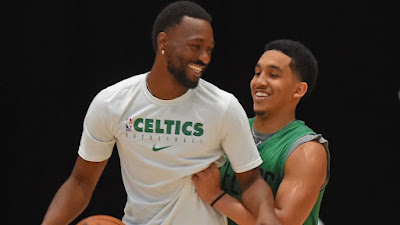 The Kemba Walker watch at the Disney World "bubble" was in full swing on Wednesday, as he was expected to practice with the team after missing back-to-back sessions on Sunday and Monday.

Coach Brad Stevens said Walker did not practice due to the Celtics All-Star having an individual workout on Tuesday, which was also the team's first day off since arriving in Orlando.

Stevens says the plan to strengthen Walker's left knee will continue with having his starting point guard workout every other day during training camp for now.


"He did a harder workout yesterday on our off day. They've got him on a one-day off, one-day on plan," Stevens said of the team's medical staff keeping a close eye on Walker's knee. "He did a lot of running and shooting. He's shooting a little bit right now. He's reacted great, his knee feels good, and that's a good thing."

Walker has yet to participate in a full team practice and it is unclear if one-day off, one-day on plan will continue throughout the Celtics three inter-squad scrimmage games, which tip-off next Friday. According to Stevens, Walker is "really prioritizing accumulating strength in that knee, so the day-on, day-off thing will be in effect for awhile."

Despite the individual workout not being ideal, Stevens was pleased with the fact that Walker didn't feel any discomfort, which will go a long way come the postseason.