Kemba Walker on his sore left knee: 'I'll be back better than ever, I think' 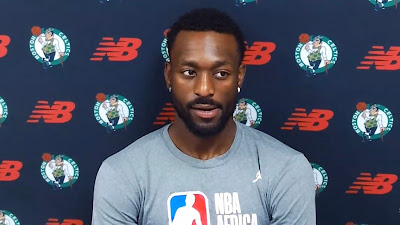 If there was ever a moment for any type of real concern regarding Kemba Walker's left knee, Thursday night might have been it.


In the Celtics All-Star's first video conference with the media since arriving in Orlando, Walker seemed to downplay his injury that has been lingering since the early months of the calendar year.

"I'm not really concerned much, honestly, because I'm trending upwards and I'm getting better and I'm getting closer to a return. So, yeah, I'm fine," Walker said following a light participation during Thursday's Celtics practice. "I'll be back better than ever, I think."

Walker, who usually has a low-energy demeanor with reporters, seemed a bit out of sort while answering questions about his knee which he described as "pretty frustrating [to be sidelined], just because I'm not a guy who misses many games."

He also couldn't give a real timeline on a possible return, saying, "I don't know but I'll be back...The plan is to take it slow. I don't want to have any setbacks. I'll be back in time when things get real, for sure."

Walker missed back-to-back practice days this week, but had an individual workout on the Celtics off day Tuesday only to miss practice the next day as part of a "one-day off, one-day on" plan. He reminded everyone that he's "just being smart, being cautious for the most part," something he's not use to, especially after experiencing discomfort when returning to Boston for individual workouts late last month.


"It was definitely a pain. I can't really explain it, but it was a pain on the side of my knee that was bothering me," said Walker. "I don't know how much else I can say. Throughout my career, I haven't missed many games, and I've been able to play through a lot. It was bothering me, so that was the best choice for me to make, was to sit out. Like I said, this is not normal for me, being out like this, but the smart way to go about things because I want to be at my best for my teammates and this organization when the regular season comes around and most definitely in the playoffs."

Walker is confident in Boston's chances for a deep playoff run, despite being disappointed that he can't contribute like he wants to so far during training camp. Still, Walker remembers his play and missing games just prior to the season being suspended and he's looking forward to getting back to playing at an All-Star level.


"I think we can be pretty tough, for sure," said Walker. "Since [Jayson Tatum's] been killing it the way he's been, I haven't really been able to help out like I really wanted to, so yeah, I'm definitely looking forward to coming back and making an impact on my teammates and just being readier than I was before the season ended."

For the time being, Brad Stevens and the Celtics medial staff will continue to try their best to strengthen Walker's left knee for the long haul come playoff time in mid August.

Until then, Boston will tip-off their inter-squad scrimmage games next Friday and their "seeding games" the week after that.