Report: Minnesota Timberwolves up for sale, Kevin Garnett is interested in buying team 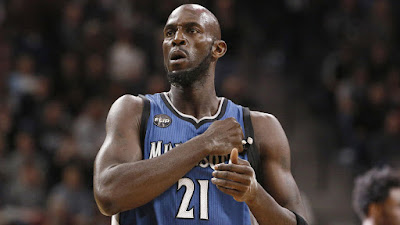 The owner of the Minnesota Timberwolves is reportedly open to selling the team, as a firm has been hired to help sell the franchise.

According to The Athletic, Glen Taylor, who has owned the Timberwolves since 1994, is asking for $1.2 billion for the team -- which has been valued at about $1.4 billion by Forbes. Taylor paid $88 million 26 years ago and is currently considering all options.

One of those options is former Celtics star and Timberwolves legend, Kevin Garnett, who is apart of a group of investors that put in a bid to possibly purchase the team.


While Garnett and Taylor have had a documented public fallen out the past four years, the Timberwolves owner told John Krawczynski of The Athletic that his only condition is to keep the team in Minnesota.

Garnett took to social media Tuesday to express his love of the Timberwolves, the city of Minneapolis and how his dream to be a majority owner of the first franchise to draft him back in 1995, goes beyond basketball.


My passion for the Minnesota Timberwolves to be a championship team is
well known but I have a deeper affection for the city of Minneapolis. I
once again want to see Minneapolis as the diverse and loving community
that I know it is. (1/2)
— Kevin Garnett (@KevinGarnett5KG) July 21, 2020

No two people love the city more than myself
and Glen Taylor and I look forward to trying to work with him to
achieve my dream. (2/2)
— Kevin Garnett (@KevinGarnett5KG) July 21, 2020


It remains to be seen if the bid will go through or not, but it seems Garnett may have begun to mend fences with Taylor following the Hall-of-Fame forward detailing how he, Flip Sanders and Taylor had a deal in place for Garnett to be part of the team's ownership after his playing days were over.

Garnett lifted his no-trade clause back in February of 2016, agreeing to a two-year farewell contract  to return and retire as a Timberwolf -- only for Taylor to go back on his word after Sanders died.


"My years in Minnesota and in that community, I cherish," Garnett told The Athletic. "At this point, I don't want any dealings with Glen Taylor or Taylor Corp. or anything that has to do with him. I love my Timberwolves, I'll always love my guys, I'll always love the people who f--k with me there. I'll always have a special place for the city of Minneapolis and the state of Minnesota in my heart.

Their relationship had gotten to the point that Garnett, who played 14 seasons in Minnesota, wanted nothing to do with any kind of ceremony to retire his No. 21, while the Celtics announced earlier this season that they would be retiring Garnett's No. 5 into the TD Garden rafters some time next year.

Garnett is the first Timberwolves player to be elected into the Hall-of-Fame, as he earned more than $334 million over his 21-years in the NBA, more than any other player in league history. If his bid goes through, he would become only the second former player, after Michael Jordan, to have majority ownership stake in a franchise.