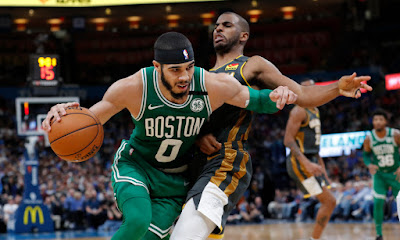 The NBA released their inter-squad scrimmage schedule Saturday, as each team will play three-games in preparation for the 2019-20 season to resume on July 30.

The Celtics will head to the Disney World "bubble" this week and their first of eight "seeding games" won't be until July 31, but they'll play their first scrimmage game a week before at the ESPN World Wide of Sports Complex.

Here's the Celtics schedule below:

While none of the three Western Conference opponents are any the Celtics will face during the eight games to wrap up the regular season, it will be a good tune-up for players to shake off some rust -- despite team starters most likely playing limited minutes.

Though a TV scheduled has not been revealed, it's unknown if these inter-squad games will be televised or not.

The Celtics began mandatory practice on July 1, as they'll travel to Orlando with 21 other teams between July 7-9. Boston currently has the third best record in the Eastern Conference at 43-21.

From July 22-28, participating teams will compete in three inter-squad scrimmages in final preparation for the resumption of the season on July 30. #WholeNewGame pic.twitter.com/c27jDrsTQw
— NBA (@NBA) July 4, 2020