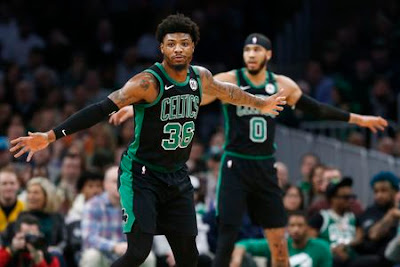 Marcus Smart has had a front row seat to the Jayson Tatum show now for nearly three-years and is very optimistic about how far the Celtics All-Star can go.

On Tuesday in one of the last player media conference calls before Boston headed off to the Disney World "bubble" in Orlando, Smart spoke about when he knew Tatum was going to be something special back during the team's surge all the way to Game 7 of the 2018 Eastern Conference Finals.


"I would probably say the playoffs in his rookie year. Just the impact he had, just the confidence he played with, and the mindset that he played with, you could definitely see that this guy was going to be special," Smart said. "He was 20 or 21 at the time. It's tremendous to see his progression, aiming for the stars and shooting for the moon, literally, that's him. The things he's capable of on the offensive end.

"I think (one thing that's) a little under-talked about is his defensive end. He's 6-foot-9 with a 7-foot wingspan. He’s actually sitting down and guarding guys, let alone coming down on the offensive end and doing what he's doing.”

"I just think that he's on the right track to becoming, like I said, if not the best, one of the best players to ever do this in this game."

Tatum, who is averaging a team-high 23.6 points per-game, also got high praise from NBA legend Scottie Pippen earlier this week -- calling the 22-year old a leader on a championship contender. If the Celtics are going to make a deep run in the playoffs, Smart knows that Tatum is definitely up for the challenge.

While the league has implemented safety protocols to limit the spread of COVID-19, Smart had a final message for all the younger players that are participating in the restart of the 2019-20 season to take the coronavirus seriously even if they are not experiencing any obvious symptoms.


"It's really concerning because unfortunately, those (asymptomatic cases) are the ones that (are) the problem," Smart said. "Because you go out there and you’re asymptomatic, you don’t know it and you go to your Grandma or you have a kid and go home to your kid, your wife, she's pregnant, you never know.

"You don't know because you don’t feel anything, so you’re like, 'I don't need to get tested. I feel fine.' Then you’re spreading it and now it’s everywhere and it's out of control even more than what it is."

Smart, who recovered from COVID-19 back in March, understands why players may view the virus as a non-threat because they've not been directly impacted by it. But the 26-year old Celtics veteran knows that the coronavirus affects people differently and he plans to take all the necessary precautions including hand washing, staying in his room and social distancing -- hoping others will follow suit.


"Us older guys, and especially guys who have had COVID, like me, really express and really chewing down on the fact to take it as serious as possible," Smart said.

"I think the younger guys are going to have some skepticism but I think as veteran guys and other guys on the team, we'll have to do our part to keep those guys, I guess, in a sense, under control and just understanding that although you might not take it as serious, you're putting other people at risk and they take it seriously, so you have to respect them."

The Celtics arrived at Disney's ESPN World Wide of Sports Complex resort late Wednesday night, where they'll practice for the next three weeks. They tip-off their eight "seeding games" schedule against the Milwaukee Bucks on July 31.