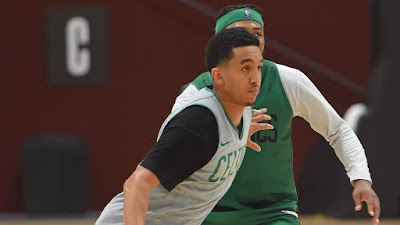 Celtics coach Brad Stevens announced on Monday that rookie Tremont Waters suffered a concussion last week and has not cleared concussion protocol yet.

Though it is still unknown how Waters suffered the concussion, Stevens says the Celtics guard is on the back-end of concussion protocol.


"Tremont has a concussion from three or four days ago, so he's at the latter stages of concussion protocol with his stuff, but he hasn't been cleared," Stevens told reporters on his video conference call. [NBC Sports Boston]


Waters, a second-round pick for the Celtics in the 2019 NBA Draft, signed a two-way contract with Boston last summer and spent most of the season with the Maine Red Claws. The 22-year-old averaged 18 points, 7.3 assists and 1.9 steals per game while earning G League Rookie of the Year honors and finishing third in the G League MVP race.

In 10 games with Boston this season, Waters averaged 3.3 points and 1.2 assist per contest.