Enes Kanter on Celtics' chemistry: 'We have enough talent in that locker room to beat anybody' 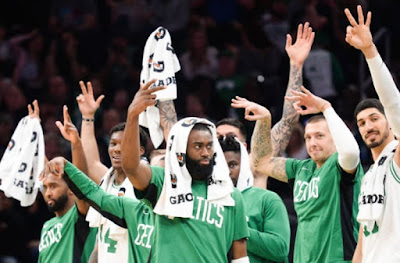 Enes Kanter has enjoyed his first season as a member of the Celtics so far, despite the four month lay-off due to the COVID-19 pandemic.

Kanter, along with All-Star Kemba Walker arrived in Boston following the roller coaster 2018-19 campaign, that saw Kyrie Irving, Al Horford, Terry Rozier and a few others depart after a disappointing finish -- falling to the Milwaukee Bucks 4-1 in the second round of the playoffs.

Kanter pretty quickly understood why things didn't end so well for the 2018-19 Celtics, who suffered a "gentleman's sweep" last spring and he saw an opportunity to help with a fresh start after a roster overhaul.

According to Kanter, in one of the first meetings prior to the start of the 2019-20 season, coach Brad Stevens preached about chemistry as one of the biggest themes they needed to focus on to succeed.


"The important thing for us is to just build that chemistry," Kanter said. "For us it was so important: The better friends we become, the better teammates we are going to be.

"So, we knew that from day one. Coach Brad said, 'Hey: the important thing is just becoming good friends, always having each other's back no matter what. On the court, whether we're right or wrong, have each other's back.' "

With the emergence of Jayson Tatum as an All-Star and Jaylen Brown having a breakout year, it was clear this was a much more cohesive team than a season ago. And of course you can't forget the personality of a veteran like Walker, who Kanter says has also played a very significant role in the team's improved chemistry and insists that the star guard is unlike anyone he's ever played with in the NBA.


"I've played with so many players, it's my ninth year in the league. He is definitely the most humble and down-to-earth superstar that I have seen and played with," Kanter said of Walker.

"The dude is just good, man. A good human being. Obviously I can't say enough about his game and it's crazy what he does on the court, but off the court, man, he's just a good dude. Very down-to-earth, very humble, always trying to help others, trying to help the rookies out."

The Celtics have proven that their chemistry and the ability to trust each other has paid off so far, as they sit with the third best record in the East entering the NBA restart in Orlando and could be championship contenders if everyone remains healthy, especially Walker.

Ultimately, the simple fact that they like being around one another on and off the court will go a long way come playoff time and Kanter believes in his teammates.


"We're just focusing on us, because I feel like we have enough talent in that locker room to beat anybody," he added. "We just need to stay together."