Brad Stevens is confident heading into the 'new season': 'Who ever wins it is going to really earn it' 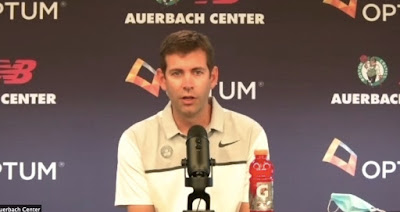 Brad Stevens and the Celtics are gearing up for a new season. They will make their trip to Orlando next week to begin training for the restart of the NBA campaign that will kick off on July 31.

However, Stevens, who spoke to the media from the Auerbach Center Wednesday afternoon, not only addressed how the uniqueness of competing in a quarantined bubble will take a toll on his players but also, how it's going to effect his coaching staff and its approach.

It's a challenging task for Stevens and his team, one that hopes will be staying in Orlando for the duration of NBA Finals. And by Stevens' estimation, the winner of it all is going to have to earn it more than any team has in the past.

"I saw Austin Rivers said today, 'the idea of an asterisk next to this championship,' he said it exactly right -- this is going to be a super unique situation," Stevens said. "Whoever wins it is going to really earn it because I think there's certainly a basketball side of this but it's also, you got to find joy. You've got to make sure that we want to make an impact on and off the court. We want to prioritize things that are important to the group as a whole.

The Celtics won't have a lot of time to acclimate to their new surroundings but neither will the rest of the teams heading to Florida. Still, Stevens believes his team has an advantage.

It was well-documented before the stoppage that most players on the Celtics have a close bond with one another and that it was that togetherness that translated nicely onto the court and eventually into the Eastern Conference standings -- where the Celtics sit at no. 3 with a slight chance to move up before the start of the playoffs. It's an element of his team that Stevens isn't worried about, considering players aren't going to have the same freedom their accustomed to.

As for the rest, as in actually playing basketball (you know, x's & o's), Stevens and his camp will be ready to tackle that by week 1.

"It is super unique and we are all as organizations are all doing things," Stevens said. "One of the things we've tried to do is pick the brain of people, not just in our sport, across the different teams that will be there, but also around different sports to see how we can keep this as fresh as possible. As I said earlier, I think, the team that has a great grit to it, finds great joy throughout the whole process, stays together throughout the whole process, will be the team that will have a great opportunity to be standing there.

"Now, obviously, the basketball will come into play here but there are a lot of unique challenges that come with this -- some predictable, some I'm sure we'll figure out when we're sitting there in the first week."