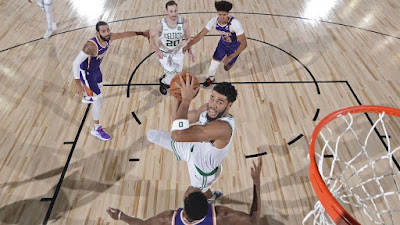 Jayson Tatum needed some time to get used to what NBA players will soon be calling the new normal in Orlando.

The days of an arena's eclectic visuals just before player introductions, a strong demoralizing chant, or the vast swing of a gigantic scoring run by the home team and the momentum that comes with it are all things of the past. That didn't stop Tatum from having a fun time Friday night throughout the Celtics' 98-84 loss to the Thunder.

For a guy who finished with three points on 1-for-6 attempts, he looked happier than any other player I've seen in recent memory that shot under 20 percent. Sunday's performance was much better.

"The last game was weird, new environment, new experience," Tatum told reporters follwing Sunday's win. "First game in months, no fans, it just was different. I had fun, I missed playing basketball but I'd be lying if I said it wasn't weird. Today felt better. Honestly, I think the team that ultimately wins it all they got to adapt the quickest."

Kemba Walker has been trying to do the same. He took in his first experience of playing in the 'NBA bubble' Sunday and expressed how odd it is to play games without fans, especially at the free-throw line, where Walker says the arena is at its quietest.

Tatum, who after making his first All-Star team, was on a tear of averaging 30 points a month prior to the league's suspension in mid-March, was asked about the new expectations that come due to his newfound stardom and if there's now a proverbial target on his back, and if that may have played a part in his struggles on Friday.

"Maybe so, I think the better you get the more respect people give you," Tatum said. "Obviously, it brings more challenges. I know how I feel when I play against another guy that I look up to or that kind of player -- it gives you that extra edge. Especially playing for the Celtics, you have to be ready to play every night."

Tatum will continue to get used to his new surroundings as he and the Celtics will play their third and final exhibition tilt Tuesday against the Rockets.