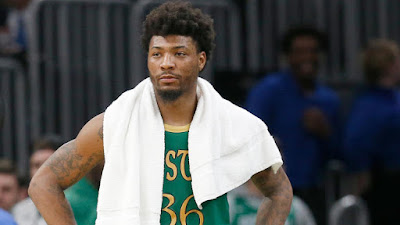 Marcus Smart has tested positive for the coronavirus (COVID-19), the Celtics guard confirmed the news via his Twitter account.

According to Smart he was tested five days ago and the results came back positive on Thursday, despite a report that suggested the Celtics roster had all tested negative over the weekend.


I was tested 5 days ago and the results came back tonight, which were positive. Ive been self quarantined since the test, thank goodness. COVID-19 must be taken w the highest of seriousness. I know it’s a #1 priority for our nations health experts, & we must get more testing ASAP pic.twitter.com/xkijb9wlKV
— marcus smart (@smart_MS3) March 19, 2020

I’ve had no symptoms and I feel great. But the younger generation in our country MUST self distance. This is not a joke. Not doing so is selfish. Together we can beat this, but we must beat it together by being apart for a short while. Much love!!
— marcus smart (@smart_MS3) March 19, 2020


The Celtics released a statement earlier in the evening about a player testing positive for the COVID-19 virus.


Smart can add this positive test to a list of injuries and ailments he has been through this season, which have included an eye infection and also an abdomen contusion.

The longest tenured Celtic, who is in his sixth season, is averaging 13.5 points (career-high), 4.8 assists and 3.8 rebounds in 53 games played so far.


"We learned today that two Lakers players have tested positive. Both players are currently asymptomatic, in quarantine and under the care of the team's physician," the Lakers said in a statement.

"All players and members of the Lakers staff are being asked to continue to observe self-quarantine and shelter at home guidelines, closely monitor their health, consult with their personal physicians and maintain constant communication with the team." [ESPN]

Fourteen out of the Lakers' 17-man roster, including two 2-way contracts, were tested after news broke that the Brooklyn Nets had four players test positive for the COVID-19 virus on Tuesday, including All-Star Kevin Durant. The team plans to test coaches and the rest of their employees as soon as possible, while everyone remains in self-quarantine.

The Lakers last played at home against the Nets on March 10, while the Celtics faced the Pacers in Indiana on the same day, prior to the NBA suspending games on March 11.

The total tally now is up to 14 confirmed cases in the NBA, 10 players (Rudy Gobert, Donovan Micthell, Christian Woods, Durant and Smart). Three Nets and two Lakers players that are unknown, plus one individual within the Denver Nuggets organization and three more who work for the Philadelphia 76ers, were also confirmed to test positive for COVID-19 on Thursday afternoon.