Grant Williams on living with Kemba Walker: 'He's one of the best human beings I've met' 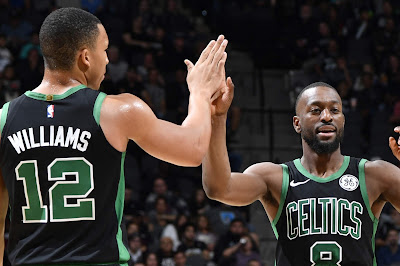 Celtics rookie Grant Williams and All-Star teammate Kemba Walker have been living together during quarantine due to the COVID-19 pandemic.

Walker offered his home in Charlotte, North Carolina to Williams -- who grew up and played high school basketball in the area.


"It's been amazing, just hanging out, relaxing, being able to get to know each other better, as well as work out together because we're here, we're isolated on our own means and we have the means. So we have weights and other things," said Williams on a video conference with Boston reporters Thursday.

"It was just a great decision. He actually offered it, because I was debating even coming home and I was worried because I knew I was going to be either in and out of the house, working out at different places if possible, or going somewhere to at least stay active. And I was like, 'Ah, I have to be with around my grandparents?' And he said, 'If you want, you can always stay with me,' and I took him up on the offer and I'm thankful for him.

"And, for as much as I talk, I'm glad that he even considered it. So we've been just lifting together occasionally, and then he has a court outside, so we've able to shoot and all, too."

Javonte Green was also invited, but the Celtics rookie has yet to join Walker and Williams in the quarantine house, while the two have strictly put up shots together and not play any one-on-one.


"We're not trying to play at all right now, because especially the potential for injury,” Williams said. "We've been doing mainly just individual work. Basically I'm there for rebounding for him, he's there for me, and ball-handling can just be straight up. You can do it with two balls. I brought my two balls down from Boston, and he had one or two here, so we're just using our own and we try our best to limit contact as much as we can, especially in these times, just to stay healthy and to get our bodies right and get our minds right, as well, because you never know. A light contest is different than guarding somebody straight up, and potentially rolling an ankle or something like that, so we're just being cautious."

Williams was asked about how living with Walker has been so far, as the NBA season has been on hiatus since March 11.


"He's great because he's comfortable. He's very to himself," said Williams. "He relaxes a lot and takes care of himself. He's not really high maintenance or anything like that. So he's a great dude. In general, he's one of the best human beings I've met throughout this process. He's a genuine guy. So all he does really is just relax, play games, and watch film, basically. Do everything he can working out too, so that's about all."

On the NBA being cautious when it comes to the season possibly returning, Williams appreciates the league taking the necessary steps before making any type of decision.


"I feel like we're all professionals, and we definitely trust not only each other but the league," he said. "They're going to do their best to protect us. I feel like they wouldn’t ask us to come back unless they had every precaution they needed, and they're going to keep everything clean and make sure that we're well (taken care of) and able to do things that we can, as well as be understanding that guys definitely have those concerns. They're going to help mitigate the risk as much as possible.

"So I feel like for myself, at least, I know that I can say I trust not only the Celtics and what they're going to provide with our facility when it's all set and ready to go, and then same with the league when it comes to wherever we play or when we play, they're going to have every single thing locked down."

Williams' attitude is much more positive these days compared to the beginning of the shutdown.


"It was definitely grim at one point, because I was like, 'Wow, this would have been fun, especially with this group that we have who enjoy each other and enjoy being around each other,'" he said. "We were having so much fun during the year, so it was definitely difficult to process at the time, and the uncertainty didn't really help. But from the get-go they kind of reached out and eased our minds, eased everything around us and made sure that we were protected and got us home safely.

"Honestly, it was difficult at first, especially when the game got canceled when we were in Milwaukee. But the next thing you know, weeks later we're talking about picking the season back up, so now I'm even happier than I was before."


"It's more so about condition, staying in shape," he said. "You can improve your game, especially in times like these. Part of the reason why I came down home and went to Charlotte was because the regulations were a little bit lighter. There were less (coronavirus) cases, as well as the weather and everything like that was able for me to be outside. Until recently, I would just be working out and doing my best to stay active and improve my ball-handling especially and then shooting when I had a chance. I was fortunate enough to have a basket and be able to have some lines and able to do things. And the Celtics sent us workouts, so I feel like a lot of us are going to be prepared when we get back, no matter how soon it will be. We're going to do our best to be at the peak shape that we can be in and as healthy as we can be, too."