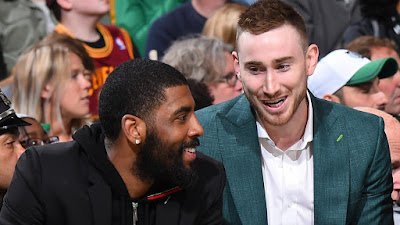 The Celtics made it to Game 7 of the Eastern Conference Finals against the Cavaliers and were a mere minutes away from an NBA Finals berth without All-Stars Kyrie Irving and Gordon Hayward.

Irving missed the final 15 games of the regular season and the entire Celtics playoff run to repair his left knee, while Hayward missed all but five minutes of the 2017-18 campaign following a broken fibula on opening night back in October 17.

Irving spoke to the Boston media last week and said he's "feeling good" following his last knee procedure due to a bacterial infection back in April and Hayward was participating in running drills prior to the removal of a plate and screws that were implanted in his ankle.

Both Irving and Hayward are on schedule to be medically cleared by August, according to Celtics head coach Brad Stevens.


"All success," Stevens said to Adam Himmelsbach of the Boston Globe, regarding Hayward's recovery. "Everything is good and pointed toward being back exactly where he was — hopefully pain-free, because that plate is taken out — in the middle of July, which probably points to an early August, mid August fully cleared time frame."

Stevens said Hayward's surgery in May was necessary to alleviate pain and irritation to his peroneal tendons.


"It was like, 'Hey, if you’re having this pain and we need to do this, let's do it now, right?'" Stevens said. "He was working really hard in Indy and he looked really good. Like, he was getting close to being able to do some two-on-two, three-on-three. But he just had a little bit of pain in the back side of his foot and that’s why they decided to remove the plate."

As for Irving, Stevens says he and the Celtics are hopeful that his recovery continues to progress that will eventually lead to a return to the court in about a six weeks.


"When we started the season, we were well-aware of the surgery, the hardware in his knee, and we knew we were going to have to manage that appropriately from a practice standpoint — two days on, one day off," Stevens said to Mark Murphy of the Boston Herald. "We had to manage it in games — all of that as the season started. He was doing that really well, and then that wire started irritating him.

"When they removed the screws to make sure he was good from an infection standpoint, he had to take antibiotics and all those things, it was tough. Really tough," he said. "We were on the west coast trip when he made that call. The threat of infection in that area is real, and the screws had to be removed immediately. He was really down — really down."

Stevens knows that once both Irving and Hayward start running pickup with teammates, the thought of a system featuring both players will begin to take shape once again for the upcoming season.


"I’ve been told they’ll both be going, if not full tilt, then pretty close to full tilt by the end of July, so August first-ish," said Stevens. "Probably won’t be playing five-on-five at that time, but will be real close. When guys start playing pick-up games, they’ll be in that mix, if they continue on the path they’re on, but there’s no indication they wouldn’t.

"Kyrie came through earlier this week, said he’s feeling fine, and shot and did some things here. But he’s not ready to compete yet — that’s still a ways away. The second surgery for Gordon went great, and he’s here getting treatment every day. Will be cleared to do all he was doing by the middle of July."

Irving recently met with Stevens and his family to check in since the Celtics playoff run ended a little over three weeks ago.


"I just had dinner with [coach] the other night – him and his wife and his kids – and talking basketball with him is such a relief," Irving said on the Bill Simmons Podcast. To have a basketball mind like that and a appreciation for the game [is impressive]. [He] doesn’t forget plays. The shift in the game happens, and we were going over things that could have been done differently, and it was just a breath of fresh air talking to him."

All things considered, including minimal roster changes, having both Irving and Hayward back in the fold by some time in August will only increase the Celtics' chances come training camp in September, as they look to make another deep postseason run.