10 Free Agent targets for the Celtics 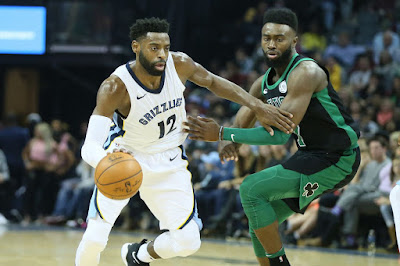 We're a couple of days removed from Game 4 of the NBA Finals, where the Golden State Warriors swept and beat the Cleveland Cavaliers to capture their second straight title.

While LeBron James figures out where he wants to take his talents to next, the young Celtics will regroup this summer to make a title run in 2018-19.

Celtics president of basketball operations Danny Ainge will look to make a 'handful of tweaks' to his already contending roster.

Outside of the LeBron's and Paul George's of the free agent world, plus the Celtics own pending free agents, such as Marcus Smart (restricted), Aron Baynes and Shane Larkin, here are some other potential options that are obtainable come July 1.

Evans was one of only three players in the NBA to average at least 19 points, 5 rebounds and 5 assists and shoot over 39 percent from behind the arc during the 2017-18 campaign, while the other two were former league MVP's Kevin Durant and Stephen Curry.

Evans played behind the often injured Mike Conley, before given a permanent starting job with the Grizzlies, despite not making it to the playoffs.

Evans might command a pay raise on the secondary market, but the Celtics don't have to rush and make an offer on the first day of free agency. Ainge did show some interest in trading for the sixth man prior to the mid February deadline.

A terrific defender, who is looking to win another championship (won in 2009 with the Lakers) and will be 33 at the start of next season. Ariza is a great role player for a title contender like the Celtics and while the Rockets will be all in on the Chris Paul and LeBron sweepstakes, Ariza might be one of the odd men out of Houston.

Gay was a great fit with the Spurs this season, but he may be looking to head back to the East and make a run towards the Finals for the first time in his career, if he chooses not to pick up his player option to remain in San Antonio. You can never have too many versatile wings, who can score, rebound and defend in Boston, especially off the bench.

Harrell had a breakout season with the Clippers after being included in the blockbuster trade that sent Chris Paul to the Rockets. The big man's minutes increased once Blake Griffin was traded to the Pistons. The Celtics could use a 6-8 power forward, who can score in limited time off the bench.

Old friend Uncle Jeff can still score whenever called upon, see Games 6 and 7 of the Eastern Conference Finals against the Celtics. Though Green will be 32 next season, the athletic forward has a career average of 13.2 points per game and enjoyed his best years in Boston. Green would be a great veteran presence in the locker room after the 2017-18 campaign he had in Cleveland.

Dedmon at 6-11 had a great year in Atlanta, splitting time as a starter and coming off the bench at about 25 minutes in 62 games played. After becoming well known in San Antonio during the 2016-17 campaign, Dedmon not only got a raise, but was worth every penny in his lone season with the Hawks. Ainge would be getting an upgrade at center if Baynes were to walk and Dedmon declined his player option and chooses to play in Boston.

VanVleet made a name for himself as one of the key contributors off the bench for the Raptors, who finished with the East's best record this season. This undrafted point guard would fit well with the Celtics, especially if Larkin and or Smart were to play elsewhere. VanVleet hit over 41-percent of his 3-pointers attempted this season.

Dougie McBuckets is coming off of his rookie deal and playing for his fourth team in five seasons (Chicago, Oklahoma City, New York and Dallas). While at 6-8, McDermott doesn't do anything else well, except shoot (career 45-percent from the field, 40-percent from behind the arc). Ainge can always use a shooter and a cheap one at that.

Mbah a Moute has always been known for his defense and guarding multiple positions, but he is an underrated shooter, who can spread the floor. At 31-years old and coming off of a dislocated shoulder, the savvy veteran wouldn't command a lot of of dollars and would be a great fit on this current Celtics roster.

The Massachusetts native had a down year in Dallas and never panned out into what the Mavericks expected of him when they traded for Noel during the 2016-17 season. Injures, a drug suspension and consistent DNP's limited Noel to just 36 games played during the 2017-18 campaign. The Mavs will have their eyes on the draft and free agent Clint Capella, who's due for a payday, rather than make an offer to a 24-year-old Noel.

If I were Ainge, I'd give the 6-11 Noel a call to come on home and recapture some of the magic he displayed in Philly during his rookie and sophomore year, where he averaged 10.5 points (49-percent from the field), 8.1 rebounds, 1.7 blocks and 1.8 steals in 30 minutes per game.

Assuming the current Celtics roster stays somewhat intact, excluding their own pending free agents, these are just a few names Ainge could realistically target or go after.