Celtics Options at No. 27: Jacob Evans 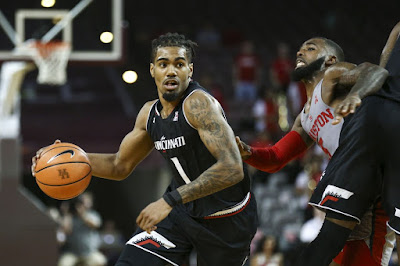 As we gear up the 2018 NBA Draft, we'll be featuring a handful of potential prospects the Celtics may be drafting with the no. 27 pick in the first-round...

The Cincinnati Bearcats' defensive rating (86.9) ranked the best in the country last season while versatile wing Jacob Evans helped carve that stinginess with his athletic frame and impressive wingspan. He is a wonderful team player, despite not being spectacular by himself.

His sophomore campaign was his best, which should have been his last season in Cincinnati but instead of declaring for the NBA Draft he returned for his junior season. Evans shot  52.1 percent and 41.8 percent from behind the arc -- where he averaged 4.6 attempts and 13.5 points per game. He had an astonishing 126.6 offensive rating.

While his junior year wasn't as stellar, the Bearcats went 31-5. His shooting percentages dropped (47 percent from the field, 37 percent from deep), but stat line of 13 points, 4.7 rebounds, 3.1 assists and 1.3 steals virtually stayed the same from the season prior.

Despite showing excellent body control, Evans didn't attack the rim nearly enough, he took 79 attempts to the rim and made 53 of them. While he wasn't as primary ball-handler, he maintained a solid 2:1 assist/turnover ratio and is a fantastic roll-man in pick-and-roll sets.

A college player's motor is often questioned, Evan doesn't deserve such criticism. He won't stop or give up and will go up for every 50/50 ball while guarding multiple positions. The Celtics held a second workout with Evans earlier this week.

Evans is smart, can be somewhat of a selfish player who must improve as a shooter to reach his full potential as a strong 3-and-D wing, still, Boston has invited him to a second workout just days before Thursday's draft. The Celtics should absolutely consider drafting him to add to their vast glut of athletic wings.