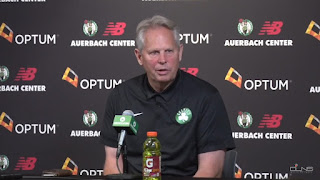 While many wondered if Robert Williams would still be available at no. 27 for the Celtics after the Lakers passed on him two picks before Boston in Thursday night's NBA Draft, Danny Ainge and co. already had their eyes set of the Texas A&M product an hour before they were on the clock.

Brad Stevens told Celtics media members Thursday night that conversations about taking Williams started after the Bucks took Donte DiVincenzo at no. 17 as they watched Williams drop pick by pick. When it was Ainge's turn to speak at the podium, he added that the Celtics knew they weren't going to have an opportunity to trade up in the draft to grab one of the elite big men in the top-10 but were excited to add someone like Williams -- a player of his caliber who Ainge believes the Celtics sorely lack.


"He's a rim protector and a rebounder, and a guy who can play above the rim on both ends of the court," Ainge said. "We don't have much of that. We have a little bit of that but not what he can do. So his abilities to protect the rim and rebound, and run the floor, I think are some of his greatest traits and uses."

When Ainge was asked if Williams' somewhat of a checkered past factored into his decision to take him, the Celtics president of basketball operations said he did his homework before making the pick. Ainge believes Williams' potential on the basketball court outweighs the fact that Williams -- a projected top-15 pick -- was still available at no. 27.


"We do our own background checks, we don't really read what everybody says," Ainge said. "When you say people are projected -- that was before he even went through the draft process -- I don't really believe that anyway.

"The game is changing a little bit but as far as having skilled bigs, we have skilled bigs on our team right now but Robert, like I said, he brings an element to the game and he's very young. I think he still has upside, I think there's parts of his game that have been untapped, as young as he is."

While many believe Williams' suspension prior to his second and final season at Texas A&M coupled with his reputation as a prospect who "lacks motivation" led to teams passing on him in the first-round, Ainge has a lot of confidence in his new rookie.

"I know that he's not perfect, but most players aren't and we like his upside -- he's got great upside. We're very excited to have him. I'm not going to defend our reason for drafting him, but we find he's going to be a good player."