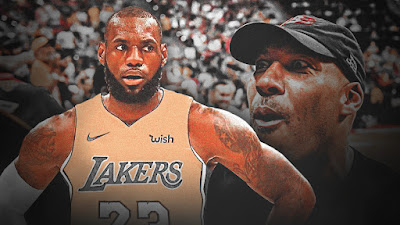 It was only a matter of time before LaVar Ball, father of Lakers point guard Lonzo Ball, was going to declare L.A. as a surefire destination for LeBron James to sign with this summer.

With less than three weeks left before the start of free agency, LaVar guarantees James will be taking his talents to Hollywood and soon will be donning a Lakers jersey at the start of the regular season. Alongside his second youngest son, LiAngelo, LaVar joined Skip Bayless and Shannon Sharpe on Fox Sports' "Undisputed" Tuesday and had this to say when he was asked about the likelihood of James becoming a member of the Lakers.


"I don't think it'll happen. I know it's gonna happen," LaVar said. "I told you to call him 'L-A'Bron.' I told you to call him 'L-A'Bron.' For him to be considered better than Jordan, his narrative has to be everywhere he's went, he's won. But as far as winning six championships in the same place -- you're not going to win in Cleveland. Nobody cares now because he went to the finals too many times.

"To justify that he's the best player in the world ever, he's got to win a couple more championships somewhere else."

"I know it's going to happen. I told you to call him LA 'Bron. For LeBron to be considered better than Jordan ... to justify that he's the best player in the world ever, he's got to win a couple more championships somewhere else." — @Lavarbigballer pic.twitter.com/bbn6vE14pq
— UNDISPUTED (@undisputed) June 12, 2018


Without mentioning if any other players will head to the Lakers along with James, Ball (of course) went on to say that his son Lonzo would make James a better player.

"You can't give Lonzo the best player in the game and don't expect them to win because he's going to make LeBron better." — @Lavarbigballer pic.twitter.com/UQS20IIaR5
— UNDISPUTED (@undisputed) June 12, 2018

Whether James joins the Lakers or not, Ball's reaction to the most sought after free agent of the summer is sure to be an entertaining one. Stay tuned.