Terry Rozier on the Celtics making a run next season: 'We're all hungry' 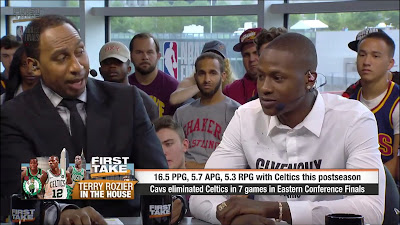 Terry Rozier was all smiles while making a couple of appearances on ESPN Monday and Tuesday morning. The Celtics guard even made some time to critique a pizza for BarStool Sports in New York, while in between making his rounds throughout the four-letter network studios.

Rozier's media tour made stops on tv shows "Get Up" and "First Take," where he was asked about the Celtics playoff run and the upcoming offseason trade rumors.


"Oh no we definitely want to stay together, us young guys," Rozier explained on First Take. "We’ve seen this run that we had this season. It’s tough to tell a group of competitors that you’ll get it next season. We’re all hungry, like I said, so we want to stay together. We want to advance to where we left off this year, and win the big one."

When asked if he believed the Celtics were a better matchup for the Golden State Warriors than the Cleveland Cavaliers, who beat Boston in Game 7 just over a week ago, Rozier didn't hold back.


"I definitely agree," he said. "Not taking anything away from Cleveland, but we have a lot of guys that can switch off the ball. Our communication is key for us, and that’s something that we valued all year. And I feel like we’d be a better matchup for them."

Rozier also spoke about his new found fame and the 'Scary Terry' moniker, while starting for injured All-Star Kyrie Irving during the NBA Playoffs


"I just want to build off that," said Rozier on Get Up. "This summer’s important for me, and obviously that recognition is just a start."


Rozier talked about how coach Brad Stevens has instilled the upmost confidence in him, which allowed the Celtics to handle the absence of Irving well and being only one win shy of becoming the second youngest team to reach the NBA Finals.


"I’ve always had a chip on my shoulder and it’s always going to remain [there]," said Rozier. “I always tell myself everyday I’m just as good as anybody. When Kyrie went down, and I was in the gym shooting, it was just me and coach [Stevens], who had walked in. And he gave me that same message: 'You’re just as good as anybody.' He believed that, I strongly believed that, and it just took off from there."


You can watch Rozier break down film on how to guard Warriors All-Star Steph Curry with the "Get Up" crew below: