Kyrie Irving comments on staying with the Celtics long-term 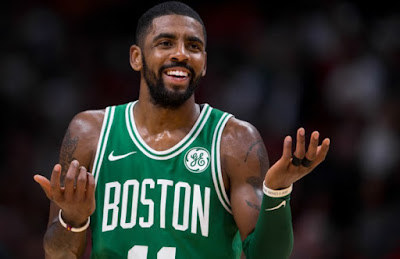 If you haven't heard already the Celtics may be looking to possibly bring in LeBron James and trade Kyrie Irving.

Don't worry either way, they're just the rumblings of another start to an NBA off-season. They're just rumors for those who want to believe them or not and voice their 'hot-takes.'

However, if you ask Kyrie Irving about his long-term future in Boston, the All-Star point guard seems only focused on the upcoming 2018-19 season, while in so many words may be only willing to cross that 'free agency bridge' next summer and not a moment sooner.

In his latest interview with Sopan Deb of the New York Times, Irving, who's getting ready to promote his film debut "Uncle Drew," due out at the end of the month, the Celtics point guard was asked about being in Boston beyond next season.


"Do you look at the Celtics as a long-term destination for you? Or are you taking it year-by-year?" Deb asked.

"Well, I mean I know that question is going to come up a lot over the next year, just based upon where my deal is," Irving responded. "And, you know, that time will arise and when it does, I think I'll have a better, clear, concise answer for a lot of people that are going to ask. Yeah, I just have to take it as being present with the Boston Celtics. You know, and just going into this year with the mindset of trying to win a championship."

Irving didn't exactly talk about wanting to win"'multiple championships" in Boston or even convey reassurance that he wants to be a Celtic for the next five or so years.

Last week, a report that the Celtics were 'scared' that Irving would walk in the summer of 2019 surfaced, while play-by-play announcer Mike Gorman also made comments that Irving could be moved if the right deal came along and given his track record with injuries.


"You’d like to see Kyrie, who’s in a contract year next year, to have the season of his career, said Gorman. "I think the big measurement for Kyrie going forward is how many games can you reasonably get out of him."

Now with all this 'LeBron to Boston' talk, why would Irving verbally commit in an interview to a team that knew he didn't want to no longer play alongside arguably the best player in the game today?

Last August, the two Eastern Conference Finalist (Celtics and Cavaliers) swapped point guards less than a month before the start of training camp because Irving wanted out.

Reports would later come to light during this past season that the Cavs had more than one deal in place to move Irving, that LeBron James knew about and approved, but of coursed denied that such trade proposals existed when asked about why his former point guard teammate wanted to leave.

Fast-forward seven months later and Irving led the Celtics in points (24.4) and assists (5.1) and put the team in great position to grab the top-seed in the East before being shut down for the season and playoffs.

Irving's back-up, Terry Rozier, not only finished out the regular season filling in nicely, but got high-praise for his play in the postseason, while averaging 16.5 points, 5.7 assists, 4.8 rebounds, 1.3 steals and 1.2 turnovers per game, all the way to Game 7 of the Eastern Conference Finals against LeBron James and the Cavaliers.

The Celtics went 10-1 at home during their playoff run, which ended one win shy of an NBA Finals berth, without Irving.

At what point does Irving start to feel he's expendable, if that thought hadn't already crossed his mind? Plus let's not forget Irving's absence in Game 7 at the TD Garden (nose surgery or not).

The city of Boston has already showed Irving plenty of love, but it's up to Danny Ainge to do the same thing, especially if he believes Irving is the guy to lead his team into the foreseeable future.

Ultimately, this upcoming campaign is likely to be the most important season of Irving's career, but to be fair, he wants to be great on his own terms. Whether that means he'll stay or go even if the Celtics win a championship or not next year, remains to be seen.

Either way, Irving will continue to enjoy all the media attention for now, similar to the likes of a certain ex-Celtic that was also known as Jesus Shuttlesworth.