Mike Gorman on trading Kyrie Irving: No one is 'untouchable' to Danny Ainge 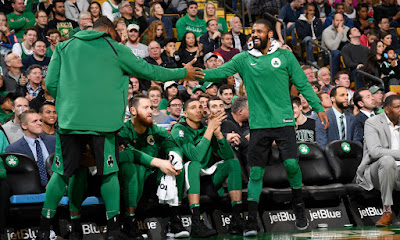 Just over a week ago, the Celtics were on the verge of an NBA Finals berth without arguably their best player in Kyrie Irving.

When the All-Star point guard was no were to be found on the Boston bench during a Game 7 loss to the Cavaliers at home, some wondered why was he not present on the most important night of the Celtics playoff run up to that point?

While Irving was recovering from surgery on his nose to repair a deviated septum just days prior to the Celtics loss, the notion that if he were able to play against Cleveland, the C's would be preparing for a Game 3 at the TD Garden as you were reading this article.

At various points of Boston's postseason run all the way to a deciding seventh game of the Eastern Conference finals, many didn't believed the Celtics could survive without Irving and challenge who ever came out of the West.

Since the Celtics have been eliminated by the likes of LeBron James, the 'wait until next year' mantra has never been as strong for Celtics fans since the summer of 2007 when Kevin Garnett arrived.

But could the potential starting lineup without Kyrie Irving be possible come opening night of the 2018-19 season for the Celtics?

Mike Gorman, the voice of the Celtics for over 30-years, says a trade for Irving night not be out of the question.


"Certainly, if you’re going to trade Kyrie you get excited because there’s a whole lot coming back," Gorman told host Evan Valenti of CLNS Media's Celtics Beat Podcast. "Danny [Ainge] doesn’t like to put the untouchable label on anybody. I do think [Jayson] Tatum is untouchable myself. It would take some unbelievable offer to get him away from Boston right now. But I think everyone else is in play to some degree."

Irving is in the final year of his contract next season and has a player option for the 2019-20 campaign, but could be included in an offer for a young superstar like the Pelicans' Anthony Davis, if New Orleans were to make him available.


"Again, if you’re talking about the big guy from New Orleans [Anthony Davis] then you’re going to have to be talking about a really, really good player going back the other way. And that’s the only other player that the Celtics really would put everyone on the table for."

As for Irving staying healthy next season, Gorman believes if the All-Star point guard can remain off the disabled list, that would go a long way on determining his future with the Celtics going forward.


"I think Kyrie’s record over the course of his career would tell you that injuries have been a problem," said Gorman. "I think you have to be smart here and look at what the facts are, and understand that they may be a problem going forward too."

Irving's season ended just days before the start of the playoffs when the Celtics guard had knee surgery, but is expected to be ready in time for training camp in September.

Most would assume that Irving will have a bounce back year and lead the Celtics even further next season, while opting out of his contract in the summer, to sign a max deal, since Boston can pay him the most.


"You’d like to see Kyrie, who’s in a contract year next year, to have the season of his career, said Gorman. "I think the big measurement for Kyrie going forward is how many games can you reasonably get out of him."

While Irving was brought to Boston last August to be one of many building blocks for the Celtics, it just made sense that he would be here long-term to possibly win multiple championships.

But with what the Celtics nearly pulled off without their best player over the last month and a half, might have others like Gorman saying they don't "think it’s a given" anymore, when it comes to Irving being in Boston for years to come.