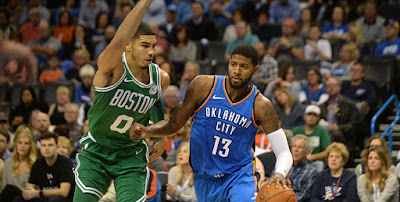 Thunder forward Paul George's mindset as a free agent is to sign with a team that will give him the best chances to win.

It was the focal point of a conversation he had with Heat guard Dwyane Wade in the second installment of a three-part ESPN documentary series chronicling George's journey as he approaches the free agency process. George, who opted out of the final year of his contract with Oklahoma City, will be testing the waters after July 1 -- the start of free agency -- and mention the Celtics as a team he believes he can help win.


"At the end of the day, that's all I wanna do," George said to Wade. "I wanna be a champion and in a way it's like I wanna come (to the Lakers). I wanna play for the home team and put a Lakers jersey on. That's always gonna be something that I wanna fulfill but at the same time it's like, what's the best move though? I know who I am as a player. I just wanna help a team win, and I feel comfortable doing so with Russ (Westbrook). And then there's other places too, from Boston to Clippers."

The fact that George opted out of the final year of his deal complicates his chances of landing with the Celtics. Without enough cap space, the Celtics can't sign him straight up and would have to pull off a sign-and-trade with the Thunder to match salaries.

However, George is expected to sign a max deal, which would ultimately compromise Boston's cap flexibility. With Al Horford and Gordon Hayward both signed for max deals and Kyrie Irving's impending free agency in 2019, it would be tough for the Celtics to commit to George.

The C's would most likely have to move one of their max guys or Irving to make room for George -- which is why seeing him mention Boston as a possible destination certainly comes as a surprise.