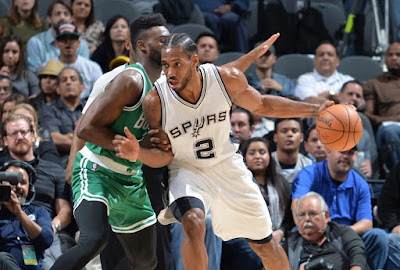 According to ESPN's Adrian Wojnarowski, the Celtics made a trade offer to the San Antonio Spurs for superstar Kawhi Leonard, at this past February's trade deadline.

The NBA insider reported that the Celtics' offer for the former Finals MVP was rejected by the Spurs.


"The Boston Celtics made a trade offer to San Antonio before the February deadline, but the Spurs turned it down -- and never made a counterproposal, league sources said," according to Wojnarowski. "San Antonio wasn't willing to discuss deals for Leonard in February. So far this spring, the Spurs remain resistant to trades."

Though details of the trade proposal were not provided, this report is clear proof that the Celtics were very much interested in the 27-year-old Spurs forward.

If San Antonio and Leonard can't reconcile, Boston has the most assets: young talent and Sacramento's No. 1-protected 2019 first round pick to re-visit another trade offer from Danny Ainge.

After watching Jayson Tatum (18.5 points) and Jaylen Brown (18.0 points) lead the Celtics through this postseason run to one win shy of an NBA Finals berth, Ainge might consider sticking with the youth movement instead of the financial risk of signing max-contract players with history of injuries such as Kyrie Irving and Leonard in the summer of 2019.

The Spurs want to keep Leonard, who missed all but nine games this season with a quad injury and due to a difference of opinion in Leonard's rehabilitation process, tension boiled over between both the organization and the All-Star.

San Antonio reportedly will only offer Leonard a super-max-contract after a meeting with the franchise player and repairing the relationship.

Boston will more than likely remain interested if for whatever reason the Spurs and Leonard can't mend fences and a trade is their only solution. But one has to believe that Celtics postseason success will raise the value of their young core when it will come time to put appealing assets on the table.