Report: LeBron James to talk to the Celtics this summer 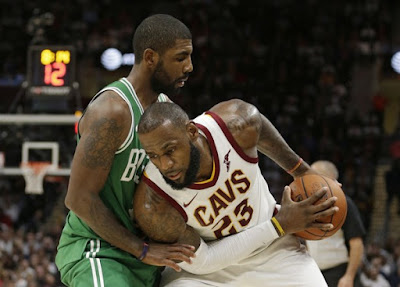 ESPN's Stephen A. Smith reported on "First Take" that LeBron James plans on having a 'conversation' with the Celtics this summer.

According to Smith, who spoke on Wednesday morning about James pending free agency plans, the former league MVP will talk with seven teams this offseason that include the Rockets, Sixers, Lakers, Warriors, Cavaliers, Heat and Celtics.

No one knows if a 'talk' means another trip to the Hamptons to try and woo LeBron, like Danny Ainge and Tom Brady attempted to do with Kevin Durant in the summer of 2016, or literally maybe just a phone conversation will suffice on if both parties should join forces.

James has a player option worth about $35.5 million, that most anticipate he'll decline and become a unrestricted free agent. But if the Celtics and James should decide that they are a match made in heaven, can only imagine how Kyrie Irving will feel about all of this, then James opting in to his option and a sign-and-trade would have to be worked out for Bron-Bron to bring his talents to Boston.

In order for the Celtics to sign James straight up, he would have to take a huge pay cut since Danny Ainge clearly doesn't have enough cap space to bring in James at $30-plus million per year.

If the Celtics were looking at a possible sign-and-trade, Ainge would inevitably have to include one of the trio of Gordon Hayward, Al Horford or Kyrie Irving’s salary to acquire James' services.

Though it seems highly unlikely that a LeBron James trade to the Celtics would come to fruition, but it goes with saying that with Boston's current roster of wings and shooter would not only compliment James, but could absolutely without a doubt challenge the Warriors in the Finals.

For now, the James to the Celtics rumor, which seemed to have started last week with former C's captain Antoine Walker's hot take on James coming to Boston, seems like a long shot if you're team LeBron, but not impossible.